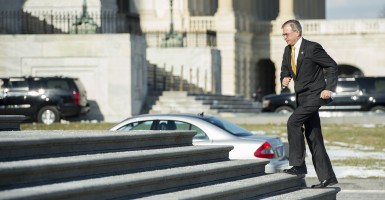 Tuesday, for the fourth time, the U.S. House will vote to fully repeal Obamacare. What’s different, though, is that with a GOP-controlled Senate, Republicans can attack President Obama’s signature legislation on their own terms.

The showdown over the Affordable Care Act comes as conservatives want GOP leaders to fulfill a campaign promise to repeal the health-care law in the early days of the new Congress.

The way they want to do it hinges on a political tactic known as reconciliation. By using this budget maneuver, conservatives believe it’s possible to avoid a Senate filibuster. They say it’s their best chance to send a repeal bill to Obama, which he’s promised to veto.

“Tuesday’s vote is the first step in a multi-month effort that should culminate with the House and Senate using the budget process to put full repeal of Obamacare on the president’s desk,” said Dan Holler, communications director for Heritage Action, the advocacy arm of The Heritage Foundation.

Obama has vowed to veto any legislation that undermines the Affordable Care Act. Conservatives view that short-term setback as a symbolic step that would work to their advantage in the long run if a Republican wins the presidency in 2016.

“The Republican-controlled Congress will send a signal to voters, states and insurers that Obamacare will be repealed in two short years,” Holler said of the strategy. Reconciliation is a budget tool that, if successful, would severely limit the scope and functionality of the Affordable Care Act. “Mr. Speaker, our constituents are hurting from the consequences of Obamacare, and we urge you to include reconciliation instructions that will repeal all reconcilable aspects of Obamacare in the fiscal year 2016 budget resolution,” he said in a letter addressed to Speaker John Boehner, R-Ohio.

Making good on their promise

Tuesday’s vote will also provide the new members of Congress a chance to show their constituents that “repealing and replacing Obamacare” wasn’t just a campaign slogan.

“We have 47 new members of Congress on the Republican side who have never had the chance to cast their vote to repeal Obamacare,” Boehner told Fox News’ Bret Baier in an interview last week.

The vote will also give the new Republican-controlled Senate an opportunity change direction and work with the House to formulate a new health-care alternative to Obamacare. “In November, voters all across the country spoke loud and clear that Congress must do everything we can to repeal Obamacare,” Cruz said in a press release, adding:

We must send this bill to the president’s desk. If he vetoes it, the GOP Congress should pass bill after bill to stop Obamacare. Each will have broad support among the American people, and Democrats in both chambers will be hard-pressed not to support them. The president will be faced with a clear choice: either listen to the American people, who have never supported this law, or ignore them, and ignore the disastrous harms to millions of families, young people, and the most vulnerable among us.

Although Republicans are united on “repealing” Obamacare, they have not yet decided how to “replace” the health care law. This week’s measure will include a provision that directs committees to develop an alternative.