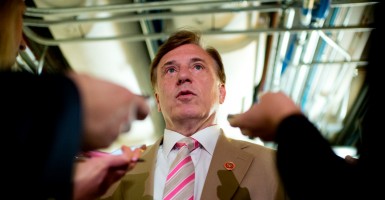 Rep. John Fleming, R-La., is emboldening House leadership to embrace a budget tactic that would lower the threshold of votes needed to rollback provisions of Obamacare.

“We all say that we want to repeal Obamacare, and we would all love a clean, full repeal,” Fleming said in an interview with The Daily Signal. “But the truth is, sometimes it’s kind of like making sausage. You have to do it one step at a time. You’ve got to approach it from the standpoint that you make substantial gains today, and then the next opportunity, you make more.”

“Sometimes it’s kind of like making sausage. You have to do it one step at a time,” @RepFleming said of repealing Obamacare

Fleming is circulating a letter among Republican colleagues that calls on House leadership to use budget reconciliation to repeal the Affordable Care Act. So far, 20 lawmakers have signed the letter, and Fleming hopes to get 80 more of his colleagues to add their names before sending it to House Speaker John Boehner.

“Mr. Speaker, our constituents are hurting from the consequences of Obamacare, and we urge you to include reconciliation instructions that will repeal all reconcilable aspects of Obamacare in the fiscal year 2016 budget resolution,” the letter to Boehner said.

Senate Majority Leader Mitch McConnell has not yet said whether he will pursue budget reconciliation to repeal Obamacare, though his office previously said he would be willing to attempt it.

Sen. John Barrasso, R-Wyo., said in a floor speech earlier this month he expects the Senate to use a variety of procedural mechanisms.

“We’re going to use every tool that is out there, including reconciliation,” he said.

Fleming said he’s confident reconciliation can successfully be used to repeal Obamacare, but contended that leadership needs to engage with members on it.

Some leadership aides have dismissed the idea of pushing for budget reconciliation and argue it’s a tool only used in the Senate. Fleming, though, said the process requires collaboration from both chambers.

“Now that we have the Senate and the House fully controlled by Republicans, we need to be working together,” Fleming said. “For them to repeal parts of Obamacare through reconciliation would require some preparatory work on our part. The budget begins in the House, so we would need to begin to format the budget in a way that would make it easier for the Senate to do a budget reconciliation.”

The tactic would not fully repeal the law, but Fleming said reconciliation would dismantle it to severely limit its functionality.

Congress created reconciliation in 1974 with the Budget Act, and it’s a tool at lawmakers’ disposal to balance the budget. The process includes the drafting of “instructions” in a budget resolution that call on House and Senate committees to craft legislation reconciling the law with the budget.

GOP leaders have placed a repeal of Obamacare at the top of their priority list now that Republicans control both the House and Senate, though it’s unclear how they plan to do so.

Despite Republicans’ goals, the president threatened to veto any legislation repealing his signature health care law, and budget reconciliation is subject to a veto.

Still, Fleming said the GOP shouldn’t rule out using reconciliation, even if it does get struck down by Obama.

“That’s how you win these battles over long periods of time. You continue to fight. You continue to bring it up. You continue to message it to your constituents and to America in general,” he said. “And when they see that the other side, in this case President Obama, continues to reject what are good ideas, that’s how you build a groundswell of support and finally push it across the finish line.”

>>> 5 Takeways from the CBO’s Report on Obamacare

Rep. Fleming Letter to John Boehner by The Heritage Foundation