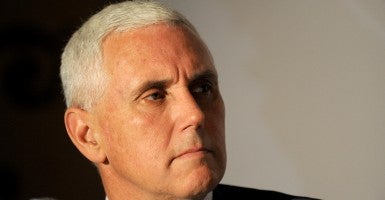 Indiana Gov. Mike Pence became the latest Republican governor to expand Medicaid in his state through what he billed as a series of “consumer-driven” reforms. But conservative groups are pushing back against the potential 2016 contender for growing an “already troubled entitlement program.”

Pence announced his decision to expand Medicaid in Indiana yesterday. The Indiana governor accepted federal funding that comes with expansion, but he is classifying it as a newer version of the Healthy Indiana Plan instead of traditional Medicaid.

“Since the beginning of my administration, we have worked hard to ensure that low-income Hoosiers have access to a health care plan that empowers them to take charge of their health and prepares them to move to private insurance as they improve their lives,” Pence said in a statement. “This has been a long process, but real reform takes work.”

Enrollment for the uninsured begins immediately, and coverage starts Feb. 1.

So far, governors in 28 states and the District of Columbia have expanded Medicaid, including Republican governors in Arkansas, Ohio and Pennsylvania.

The Affordable Care Act gave states the opportunity to expand Medicaid, which lowered the federal minimum standards for eligibility. The government provides higher funding for states that expand the program.

“It is a proven model for Medicaid reform across the nation,” said @GovPenceIN.

Unlike traditional Medicaid, HIP 2.0 requires low-income people to contribute to a Personal Wellness and Responsibility (POWER) account, which is similar to a private-sector health savings account. Beneficiaries who fail to make payments to their POWER accounts face consequences that include a loss of benefits, and the required contributions vary with income.

HIP has existed in Indiana for seven years and serves 60,000 consumers across the state. Now, with the updated program set to be implemented, Pence’s administration said up to 350,000 uninsured Hoosiers will receive coverage.

“It is a proven model for Medicaid reform across the nation,” he said.

Pence, whose name has been thrown around as a potential 2016 presidential contender, bills HIP 2.0 as a “consumer driven” alternative to Medicaid that includes many conservative reforms.

However, conservative groups argue Pence is simply accepting the government-run program under the guise of HIP 2.0.

“While Governor Pence’s attempt to reform traditional Medicaid is laudable, our concerns with HIP 2.0 remain,” Chase Downham, state director for the Indiana chapter of Americans for Prosperity said. “Traditional Medicaid needs to be reformed, and states should be free to pursue market-oriented solutions that will help to modernize the program.”

“However, the price of reforming traditional Medicaid should not come at the cost of expanding an already troubled entitlement program to include hundreds of thousands of able-bodied, working-age, childless adults,” he continued.

In a June article for The Daily Signal, Nina Owcharenko, director of The Heritage Foundation’s Center for Health Policy Studies, said expansion of Medicaid doesn’t need to be expanded in order to be reformed.

“Conservatives believe government’s role in health care should be smaller, not bigger,” she said. “Expanding Medicaid makes it bigger.”

Owcharenko said that Pence’s plan increases state and federal spending on health care and noted that “a Medicaid expansion, even one like Indiana, fuels more government spending, more taxes, higher federal deficits and higher federal debt piled on our children and grandchildren.”

She also said that the new version of HIP would add more than 300,000 to Medicaid rolls, which increases the reliance on government.

“The Medicaid expansion dilemma in Indiana is a classic example of good intentions gone awry,” Owcharenko said. “What started as an effort to test a consumer-directed model through Medicaid has veered off course, leaving core conservative values behind.”