5 Takeaways from the CBO’s Report on Obamacare 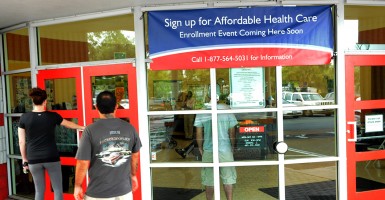 People arrive to sign up for health insurance under the Affordable Care Act at the Dover Shores Community Center in Orlando, Fla. (Photo: Paul Hennessy/Polaris/Newscom)

A nonpartisan entity of the federal government has found that the Affordable Care Act will cost the government less than expected. However, the reduction in the law’s price tag comes among findings that millions of Americans could lose their employer-provided health insurance.

The Congressional Budget Office came out with a report yesterday revising the costs and budgetary effects of the Affordable Care Act, also known as Obamacare.

Though the agency found that the health care law is projected to cost the government less than originally thought, the CBO projected enrollment in Medicaid and the Children’s Health Insurance Program (CHIP) will continue to increase.

The CBO attributed the drop in Obamacare costs to lower-than-expected enrollments and subsidies given to those who are eligible.

The number of consumers receiving subsidies could decrease even further following the U.S. Supreme Court’s ruling in the court case King v. Burwell. The high court will decide whether Americans purchasing health insurance on the federal exchange, HealthCare.gov, are eligible for subsidies.

The CBO found that Obamacare will cost the government less than expected, but up to 10 million will lose their employer-based coverage.

Here are five takeaways from the CBO’s report: