How One Senator’s Scheme Could Come Back to Haunt Obamacare 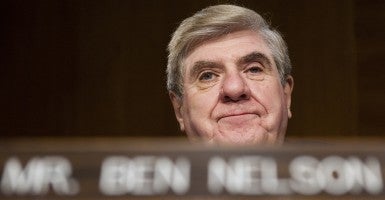 LINCOLN, Neb.—Former U.S. Sen. Ben Nelson may go down in history for casting the crucial 60th vote needed to pass Obamacare, but the concessions he got in exchange for that vote ultimately could doom the health care law.

Nelson is well known for negotiating for extra Medicaid money for Nebraska—in what was derided as the Cornhusker Kickback, which was later scuttled. He was much less known for also insisting that states be allowed to run their own health care exchanges, where people shop around for health insurance.

The question of whether federal subsidies can be given to people who did not sign up for the Affordable Care Act through state-run exchanges is the subject of a lawsuit, King vs. Burwell, the U.S. Supreme Court will take up next year.

The plaintiffs argue the law bans the subsidies in 36 states that use a federal enrollment portal. If they prevail, subsidies would go only to low- to middle-income people in the 14 states that chose to run their own exchanges.

If the challenge to the law is successful, some believe Obamacare would be obliterated.

Who’s responsible for insisting the federal government set up those two options for states? Nelson.

In 2010, Nelson told Politico and Fox News host Greta Van Susteren giving states the option of running their own exchanges was non-negotiable.

And even now, Nelson confirms he insisted on the state-run exchanges “rather than just a federal program without any state options.”

The critical nature of Nelson’s involvement was confirmed by none other than MIT economics professor Jonathan Gruber, an Obamacare architect who has come under fire after videos surfaced of him saying voter stupidity was crucial to passage of the health care law.

In a 2012 speech in San Francisco, Gruber characterized the decision to add state exchanges as “a political compromise”—with Nelson—and said they were the centerpiece of the law.

In another video, Gruber said, “If you’re a state and you don’t set up an exchange, that means your citizens don’t get their tax credits.”

Contrary to some reports, Nelson said this was no secret at the time of the vote.

“People that I knew back here [in Washington] understood what my role was,” he said. “It was no secret at all.”

Deena Winter is a reporter for Watchdog.org, a national network of investigative reporters covering waste, fraud and abuse in government. Watchdog.org is a project of the nonprofit Franklin Center for Government & Public Integrity.