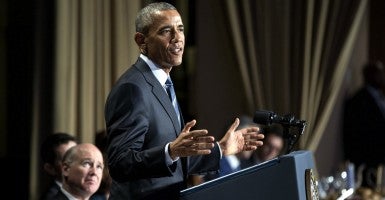 These and other mounting problems, as Heritage Foundation Senior Fellow Robert E. Moffit shows in a comprehensive Heritage paper, plague the Affordable Care Act. The law is a good example of bad policy.

Here are four reasons why Obamacare is not aging well:

Contrary to repeated administration promises, Obamacare has not only failed to lower costs, but has also imposed additional expenses on millions of already over-stretched individuals and families.

When it comes to average job-based premiums, the Congressional Budget Office (CBO) says that they, too, are climbing, and will rise almost 60 percent between now and 2025. Deductibles in the Affordable Care Act exchanges have also jumped higher than officials anticipated, discouraging the purchase of the Obamacare coverage among the poor and the young.

President Barack Obama said that his law would “bend the health care cost curve” downwards. It has done exactly the opposite.

In 2015, federal spending on major health programs (Medicaid, Medicare, and the Affordable Care Act) totaled $936 billion, a 13 percent increase over the 2014 level and exceeding the huge Social Security outlays for the first time.

Today, based on CBO data, the net cost of Obamacare’s coverage provisions—subtracting the taxes and penalties—will amount to over $1.4 trillion over the next ten years.

While administration allies may applaud this big expansion of government spending, it nonetheless conflicts with the oft-stated Administration goal of “bending the cost curve” downwards.

Obama promised he would not raise taxes on the middle-class. But Congressional Budget Office data indicates that Obamacare’s numerous taxes, fees, and penalties will cost about $832 billion over the years 2016 – 2025. And middle-class Americans are going to be hit—directly and indirectly.

Even lower-income workers will get hit by Obamacare taxes, including the so-called Cadillac tax on expensive health plans offered by large firms, as well as the individual mandate tax penalty.

The bottom line is that middle-class Americans will get hit hard by Obamacare taxes.

For 2016, CBO initially estimated 21 million enrollees in the government-created exchanges. Today, that sign up number has been revised downward to 13 million and, the CBO now says, will more likely end up as 12 million.

Robert Pear, veteran health reporter of the New York Times, reports that, according to a new Blue Cross and Blue Shield Association study the newly insured under the Affordable Care Act were sicker, used more medical care, and had higher medical costs than those who already had coverage.

That, of course, guarantees even higher premium increases.

The Obama administration has published thousands of pages of Affordable Care Act regulations governing health care, but has granted exemptions to certain companies and unions. But, conspicuously, religious institutions have not found favor with official Washington.

For instance, U.S. Supreme Court recently heard oral arguments from the Little Sisters of the Poor last week in their challenge to the government mandate which forces them to pay for certain drugs (including abortifacients) in their health plans in direct violation of their religious beliefs. The outcome has yet to be determined.