There Hasn’t Been One Since 2001. Can This New Budget Chairman Deliver a Balanced Budget? 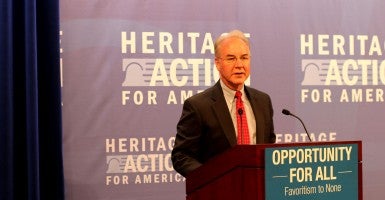 A balanced budget and health care reform. Those are two things Rep. Tom Price, R-Ga., is pledging to deliver as he takes the helm of the House Budget Committee.

Price delivered a speech outlining his priorities for the Budget Committee during the 2015 Conservative Policy Summit. Heritage Action for America, the lobbying arm of The Heritage Foundation, is hosting the two-day conference before Republicans depart for their retreat.

“I think we’re in a win-win situation,” he said of the 114th Congress. “If we can get anything on the president’s desk, we win because if he signs it, it’ll be good policy for the American people. If he vetoes it, then it begins to demonstrate to the American people that contrast that we’ve been unable to do so because of the muddle of mess over the last four years.

“That contrast [is] between the folks who are really trying to solve the challenges and the problems that we face in this country, and who’s standing in the way,” Price said. “The president is going to be laid bare, and the emperor has no clothes.”

Under Price’s leadership, voters can expect to see a balanced budget within a 10-year window—a fiscal accomplishment he is confident will happen.

The federal government last recorded a balanced budget in 1998 under Democratic President Bill Clinton and a Republican-controlled Congress. Budget surpluses continued through 2001.

Congress must submit its fiscal roadmap by the end of March, Price said. Not only does he believe Republicans will put forth a balanced budget, he’s also optimistic lawmakers will be able to do so in even less time.

“We’re going to challenge [new Budget Committee members] to find those new ideas and to come up with those creative solutions so that we can get it to balance in a shorter period of time,” Price said.

In addition to proposing a balanced budget, Price plans to focus on health care reform.

“Obamacare is not only harming the quality of health care provided in this country, it is harming our economy,” he said. “It’s doing so in ways big and small.”

“Obamacare is not only harming the quality of health care provided in this country, it is harming our economy,” said @RepTomPrice. “It’s doing so in ways big and small.”

Price, an orthopedic surgeon, looked to June as the key month for reform. Then, the Supreme Court will rule in the case King v. Burwell and decide whether tax subsidies provided under Obamacare are available to consumers purchasing insurance on the federal exchange at HealthCare.gov or only through the 14 exchanges run by the states.

As written, the law states that subsidies are available only for those participating in the state-run exchanges.

Price said that if the high court adheres to the “letter of the law,” Obamacare would be “unraveled pretty doggone quickly.”

Republican leaders already announced plans to tackle the health care law within the first few weeks of the 114th Congress. Price contended that the GOP should have a replacement for Obamacare ready if the Supreme Court rules that subsidies aren’t available for those enrolling through HealthCare.gov.

“It’s not a good thing to not have any replacement, not to have any solution ready and available for Congress to act upon,” he said.