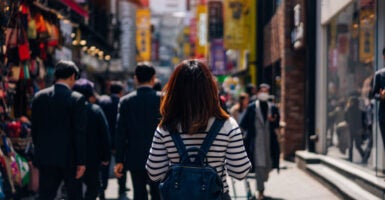 The U.S.–South Korea alliance has been an economic boon to both countries and the world. But more can be done to bolster the strength of the relationship. Pictured: A woman shops in the Myeongdong street market in Seoul, South Korea. (Photo: Mongkol Chuewong/Getty Images)

Half a decade ago in Seoul, then-Deputy Secretary of State Antony Blinken highlighted the importance of the U.S.-South Korea alliance by noting:

South Korea is a nation that has faced down war, faced down poverty, faced down political chaos, faced down division to emerge as an economic powerhouse, a vibrant democracy, and a donor partner that itself now provides aid to those in need.

South Korea is a nation that has instinctively understood the only way to really predict the future is to create it. It is this common spirit—anchored in shared values and mutual interests—that binds the United States and South Korea together in one of the strongest, most effective, most enduring alliances on the planet.

That observation rings even truer today.

South Korea’s relationship with the U.S. is underpinned by a strong foundation of shared ideals, enduring people-to-people ties, and close business cooperation led by global companies in both countries.

The bilateral relationship is one of the strongest and most successful built by America since the end of World War II. Once a recipient of U.S. development assistance, South Korea has become one of the most resilient and competitive economies in the world.

The United States and South Korea share a relationship that is truly unique among our closest friends and allies.

Many of America’s main alliances today are with countries the U.S. was once forced to fight against. Japan and Germany are obvious examples, but in the early days of the American history, it was with England that we were most often at war. Clearly, adversaries can become friends.

However, Americans and South Koreans have never been enemies. The two countries’ bilateral relationship was forged in the struggles of World War II and, in its aftermath, the struggle against communist aggression from China and Russia.

Fighting together against common enemies has indeed forged a lasting, vibrant relationship between the two long-time allies based on mutual respect and common values.

Today, those values include democracy, capitalism, respect for human rights, religion, and much, much more. There are more than 1.7 million people of Korean heritage living in the United States, and at least 130,000 Americans living in South Korea. The two countries support each other, defend each other, and depend on each other.

The U.S.-South Korean economic alliance has been fulfilling its promises. Yet, more can and should be done, given the fact that there are untapped, innovative ways in which to broaden the work going forward together.

Enhancing trade and facilitating investment in the framework of the Korea-U.S. free trade agreement is critical for the future economic health of the two long-time allies. This can be done through the greater utilization of secure digital trade, particularly to deal with trade uncertainties intensified by the current pandemic.

Additionally, both countries should work closely together to reform and upgrade the World Trade Organization. This is certainly a key goal for elevating both countries’ strategic cooperation, and should not be missed.

More than ever, 2021 is the year for Washington and Seoul to invigorate their proven and pragmatic economic partnership, working together to face the challenges of a post-pandemic world.