Why South Korea Is Key to America’s Indo-Pacific Strategy 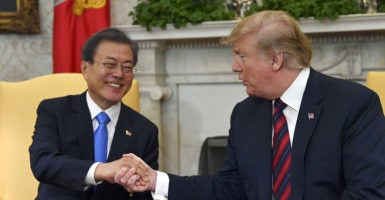 During his recent visit to South Korea, President Donald Trump discussed with South Korean President Moon Jae-in a range of issues pertaining to our bilateral partnership.

One of the least-noticed but actually critical outcomes was an acknowledgement by Moon of America’s Indo-Pacific strategy, which refers to America’s approach to various powers in the region.

By describing the United States-South Korea alliance as the linchpin of peace and security in the Indo-Pacific region, Trump and Moon agreed to deepen bilateral cooperation on the U.S. Indo-Pacific strategy and Seoul’s New Southern Policy.

In recent decades, the United States and South Korea have created a practical framework for fruitful economic partnerships that is delivering measurable, concrete benefits for Americans and Koreans alike.

Dynamic trade and investment activities have deepened and broadened the economic relationship, and the two longtime allies have much more to gain if they work together to reinforce the values of open markets and free trade in the Indo-Pacific theater.

In the rapidly evolving world of development assistance, with its greater emphasis on the vital role of the private sector in achieving durable economic growth, enhancing U.S.-South Korean international development cooperation presents a unique opportunity to coordinate the two countries’ ongoing development assistance more strategically and maximize the potential impact of economic diplomacy.

As a former recipient of U.S. development assistance, South Korea, now one of the richest countries in the world, provides a unique perspective and credibility to the donor community it has now joined.

A strategic part­nership between South Korea and the United States to provide developing countries in the Indo-Pacific region with values-driven, results-oriented development assistance has consid­erable potential to promote best practices and strengthen the efficiency of economic engagement.

Such a strategic partnership would in turn reinforce other vital economic and diplomatic links between the two allies. South Korea has proven to be a reliable and strong ally for America in advancing freedom, opportunity, and prosperity in the region and around the globe.

Much more can be accomplished, as the United States and South Korea have a lot to offer each other and much to gain from their ever-evolving partnership in building “environments that foster good, productive capitalism” in the Indo-Pacific region.