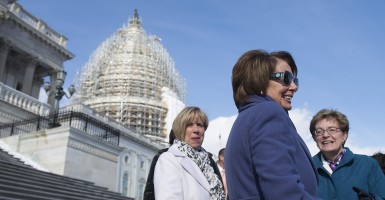 Is Congress a “small” business?

That’s the debate playing out in a Washington courthouse between the federal government’s personnel office, the District of Columbia’s health exchange and a local taxpayer who brought the case.

For years, Republicans have made the case that members of Congress and their staffs are getting special treatment under Obamacare. Their complaint stems from a 2013 decision by the federal Office of Personnel Management that allowed more than 12,000 congressional employees, their spouses and dependents to purchase health insurance from D.C.’s small business exchange.

Now, as the case makes its way through D.C. Superior Court, the city’s attorneys say those congressional employees should not be permitted to purchase health insurance through the District’s Small Business Health Options Program.

Under the Affordable Care Act, a small business is defined as an entity with fewer than 50 employees. There are more than 20,000 employees on Capitol Hill.

Despite the discrepancy, D.C.’s attorneys also argued that the 2013 guidance issued by the Office of Personnel Management supersedes the D.C. Health Benefit Exchange’s rule classifying a small business as an entity that employees 50 people or fewer.

The D.C. Superior Court has not decided whether it will hear oral arguments on the case.

By enrolling in the D.C. SHOP exchange rather than the individual marketplace, members of Congress and their staffs are eligible for an employer contribution. According to OPM, the employer contribution can cover a maximum of 75 percent of a congressional worker’s total premium for a plan.

“D.C., for whatever reason, wanted to give this special benefit to Congress,” says Michael Bekesha of Judicial Watch. “…The law says one thing. D.C. says something else.”

“D.C., for whatever reason, wanted to give this special benefit to Congress,” Michael Bekesha, a lawyer for Judicial Watch, told The Daily Signal.

“That’s kind of what happened here. Congress isn’t a small business, so Congress or the administration called on D.C. and said, ‘Will you do this?’ And D.C. said yes. That’s where we are. The law says one thing. D.C. says something else.”

>>> How Much Will Obamacare Fines Continue to Rise?

Sen. David Vitter, R-La., has called on Congress to end what he refers to as the “Washington Obamacare exemption.” He’s introduced legislation requiring Congress to enroll in the individual insurance marketplace.

“Nobody considered Congress a small business, which is why I’ve said for months that the Washington special exemption is unlawful and just plain unfair,” Vitter said in a statement. He continued:

I’ll continue to fight against the egregious misuse of the small business exemption so that all Washington insiders—including President Obama and each and every member of Congress—are forced to live under Obamacare just like the rest of America without a special taxpayer-funded subsidy.

Representatives for both the D.C. Health Benefit Exchange and OPM told The Daily Signal the agencies do not comment on pending litigation.

In September, Judicial Watch obtained copies of applications completed by Congress with D.C. Health Link through a Freedom of Information Act request. On the forms, applicants with the House and Senate claimed to work for a small business with 45 employees each.

Judicial Watch argued Congress boasts more than 20,000 employees. It filed a lawsuit on behalf of D.C. taxpayer Kirby Vining. The group claimed that lawmakers relied on fraudulent applications in hopes of obtaining insurance.

The Affordable Care Act required lawmakers and their staffs to enroll in health insurance through Obamacare beginning Jan. 1, 2014. Individuals who purchase insurance through the individual marketplace—as opposed to the SHOP exchange—forego their employer contributions.

Just months before Obamacare’s implementation, congressional leaders began scrambling to find a way for them to keep their employer contributions.

According to a 2013 paper from Heritage Foundation health policy experts Bob Moffit and Ed Haislmaier, which examined Congress’ efforts, the attempts were to “defray the cost of their new coverage” under Obamacare.

Because members of Congress did not, and practically could not, read through and digest Obamacare’s 2,700-page legislative text in 2010, they ended up voting themselves out of their own health insurance. Then, realizing what they had done, for the next two years they worked desperately behind closed doors to see if there was some way to ‘fix’ the mess they made for themselves.

In January 2014, Sen. Ron Johnson, R-Wis., sued OPM and Director Katherine Archuleta for allowing lawmakers and their staffs to retain their employer contributions by enrolling through the SHOP exchange.

“What is common sense to the American people is that Congress is not and cannot be anyway interpreted to be a ‘small employer’ and enroll its members and personnel in the D.C. SHOP exchange,” says @SenRonJohnson

“Congress employs more than 21,000 people,” Johnson said in a statement to The Daily Signal. “What is common sense to the American people is that Congress is not and cannot be anyway interpreted to be a ‘small employer’ and enroll its members and personnel in the D.C. SHOP exchange.”

If Johnson and Vitter are successful, Moffit said it would be the most effective course of action in getting lawmakers and their staffs on the individual exchanges.

“If Sen. Vitter of Louisiana and Sen. Johnson of Wisconsin get their way, this charade will quickly come to an end,” he said. “Congress should be forced to live under the laws they impose on the rest of us.”