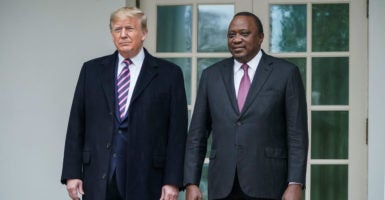 America’s first trade deal with a sub-Saharan African country is in the works, and the results could be significant.

Earlier this month, President Donald Trump and Kenyan President Uhuru Kenyatta announced they would pursue a free trade agreement between the two countries.

With about $1 billion in trade with the U.S. annually, Kenya is East Africa’s economic engine and home to a growing number of industries.

As U.S. Trade Representative Robert Lighthizer highlighted, “Kenya is a recognized leader across the continent, an important strategic partner of the United States, and there is enormous potential for us to deepen our economic and commercial ties” through a “comprehensive, high-standard agreement.”

Kenya is strategically important to the U.S. in a number of ways. Since achieving independence from Britain in 1963, Kenya has been one of the few African nations to pursue a pro-Western political course. In contrast to most African governments, Kenya has permitted and welcomed American military access to its naval and air bases.

According to the Trump administration’s new Africa strategy, which was unveiled at The Heritage Foundation in 2018, America’s renewed engagement with Africa focuses on “advancing trade and commercial ties” with the region to the benefit of both the United States and Africa so that America’s “economic partners in the region” can “thrive, prosper, and control their own destinies.”

Indeed, thriving private sectors are the best source of inclusive and broad-based economic growth because they seek out opportunities for trade, investment, and partnership.

The private sectors in both the U.S. and Africa have played indispensable roles in moving this agreement to the starting line, and the potential pact almost certainly would incorporate concrete steps to enhance private sector-to-private sector engagement between the two nations.

Kenya’s economic and development trajectory is challenged by weak governance and the lack of regulatory efficiency, as documented by The Heritage Foundation’s annual Index of Economic Freedom. As political stability has improved, the Kenyan government has made progress toward alleviating structural obstacles and boosted economic growth.

Kenya’s growing entrepreneurial middle class has flourished as the country’s economic freedom, which has been on the upswing since 2017, continues to improve. The government has attracted direct investment for infrastructure development and continues to promote regional trade liberalization.

Kenya also pushed for the African Continental Free Trade Agreement, which 54 of the 55 members of the African Union have signed on to and 29, including Kenya, have ratified.

Lighthizer, the U.S. trade representative, said America’s bilateral free trade agreement with Kenya would complement the continental accord and hopefully serve as a blueprint for other African countries to reach similar agreements with the United States.

A trade agreement with Kenya also would bolster America’s existing engagement with sub-Saharan Africa through the African Growth and Opportunity Act, which allows many African countries to export goods to the United States without quotas or tariffs.

The law is useful, but it is an incomplete approach to increasing U.S.-African trade that ignores the advantages of free trade within Africa and the mutual benefits that Africans and Americans would realize from free trade.

As the administration’s new Africa strategy pointed out: “Enhancing U.S. economic ties with the region is not only essential to improving opportunities for American workers and businesses; it is also vital to safeguarding the economic independence of African states and protecting U.S. national security interests.”

Toward that objective, a bilateral free trade agreement with Kenya would present a timely opportunity to solidify America’s pragmatic engagement with Africa as a practical stepping stone to greater partnerships with the countries on the continent.