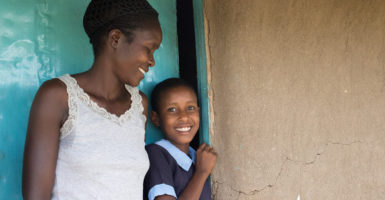 The East African nation of Kenya is home to 3 million orphaned and street children. The majority of these kids have living relatives, which in the late 1990s came as a great surprise to one local nonprofit.

Agape Children’s Ministry is based in Kisumu, the third-largest city in Kenya. The Christian nonprofit says it has reunited thousands of children with their families over the past decade.

“Agape has worked with over 3,000 children over the past 11 or 12 years. Of those children, Agape has successfully reunited over 2,300,” Chris Page, field director of Agape Children’s Ministry, said during a recent phone interview with The Daily Signal.

The ministry’s model is powerful because it works. Agape picks up children from the streets and finds out where they came from and how they came to be on the streets.

From there, the ministry locates family members and connects them with a trained social worker who works with the child and family members to ensure successful reunification.

Agape was founded in 1993 as a children’s home in response to Kisumu’s massive number of street children. But in the late ’90s, Agape workers discovered that many of the children living in their orphanage had a home they could return to with at least one, if not many, living relatives.

Page explained in the June 6 interview that most children in Kenya attend boarding school, whether wealthy or poor, and travel home for the holidays:

As children that were going to the community school began going to their rural homes to spend time with their families during school breaks, the children that were in care at Agape began saying, ‘Hey, we want to go home too.’ Our staff and missionaries were really confused, because the stories that our staff had been hearing for so long was that all these children were orphans and they had nothing and they had no family.

What the Ministry Discovered

Agape workers started to do a little digging and found that all of their children did have living relatives.

“You realize dealing with street kids or kids in crisis,” Page said, “that they adopt survival language and they don’t tell the truth about where they are from and why they are on the streets and why they are separated from their family. It really takes going and visiting that family to find out the true story.”

The reasons for separation are many. While the financial situation of the family does play a role in a child’s ability to remain with his or her family, there are almost always other factors at play.

Page referred to the reasons for separation as “poverty plus,” saying:

Poverty very rarely is the only factor that leads families to break up and children to leave home. Poverty may be a contributing factor, but it is never the only factor. When we dive into the reasons why, there are some major areas of dysfunction that lead to a child leaving home. Some are child-related and some are family-related. On the family side, breakdown in marriage is No. 1.

In Kisumu, right now, we have 72 children on campus undergoing rehabilitation [in order to be reunited with family]. We talk through each child’s case every week. Maybe five out of the 72 children [currently on campus] come from families where mom and dad still live together.

Due to the death of a parent or to parents separating, “children get left behind,” Page said.

Other contributing factors include stealing, youth rebellion, and abuse.

If a young person gets in with the wrong crowd and begins stealing, he or she may flee for fear of the repercussions of their actions. And sometimes older children simply run away from home in moments of teenage rebellion.

“Our average age on campus for boys has been 12 and a half exactly, for the past two years,” Page said. “So it is right at that point of puberty where the frontal lobe kicks in, and kids start trying to make decisions on their own. They get tired of what is going on at home and they hit the road.”

Of course, in some instances, it’s not safe for a little one to return to the home he or she left.

“There is a considerable amount of physical and sexual abuse that is perpetrated against our children,” Page said soberly.

In cases where it is unsafe to return a child to the home of origin, Agape searches for other relatives. Repeatedly, Agape staff say they have been blessed to see how willingly aunts, uncles, brothers, or grandparents take a child into their home to love and raise.

Of the more than 3,000 children rescued, Agape has been unable to find a child’s family in only six instances.

In a phone interview with The Daily Signal, Selestine Okumu, Agape’s child welfare manager, recalled the story of a young girl named Mercy.

Mercy was 7 years old when Agape staff found her rummaging through garbage at a dump in the slums of Kisumu. She was looking for food to give her 4-month-old baby sister.

Mercy’s parents were separated, and her mother was working as a prostitute. Mercy often was left for hours or even days at a time to take care of herself and her sister.

After a conversation with the mother, she and the Agape workers agreed that it was in Mercy’s best interest to return with Agape staff to the ministry base.

Agape immediately began searching for some of Mercy’s relatives. The young girl knew the name of her uncle and the town he was from—that was all.

The uncle was able to provide the details of how to find Mercy’s father, and it proved to be a beautiful reunion.

“He was so happy,” Okumu recalled, adding:

The moment he saw the girl, he knew that she was his daughter. He is a born-again Christian and so we were able to all pray together. When he [the father] heard about the girl’s life, how she had gone through so much in the hands of the mother, he was in tears. The person who he thought would take care of the child neglected her.

We worked with the father and Mercy for quite a while. We took them through an education process and after that, we were able to reunite the family.

Mercy and her baby sister now live with their father and stepmother. Page says the family is thriving, and Mercy is excelling in school.

Some may wonder why it is not better for a child to just stay in care at Agape. Would they not be safer, healthier, and more prepared for the real world if they remain in institutional care?

The Agape team, however, saw a negative trend among those children who grew to adulthood with the ministry.

Providing some context, Page explained that finding work can be difficult for anyone in Kenya, even those with an education.

“In Kisumu, we probably have a 20% or 30% formal employment rate,” Page said. “The rest of the population is working informally—they are just hustling, getting by. And so finding jobs is really hard.”

Due to the lack of work, he said, it is common for young people to return home after they graduate high school, to work and live with their family.

“The problem though, as these children exited Agape as adults, they had no one to fall back on,” Page lamented, adding:

In fact, the only family they knew was Agape, and the only home they knew was Agape. Sadly, we damaged a lot of children, and ultimately adults, exiting our program, because they had lost all ties to their inheritance and their homes. They lost ties to their families. It was a heartbreaking realization … that really started pushing us toward this reintegration model.

Due to the organization’s success, it has expanded to the city of Kitale, about 100 miles north of Kisumu.

The ministry now rescues and reunites over 700 children a year with family, and conducts 17,000 home visits annually in Kitale and Kisumu to ensure that every child continues to thrive at home.

The Agape model is rapidly spreading.

“We see the replication of Agape’s model to be where the greatest impact can be felt most quickly,” Page said. “Right now in Kenya, we are actively consulting with four organizations to teach them Agape’s model. We have a client list of another 70 organizations that we are going to help take through the next steps in the process [of the reunification model].”

If we can reunify those 40,000 children [with family], then those beds are available to rescue 40,000 more kids who are currently on the streets.

We really don’t believe that we would have the level of success that we do without sharing the gospel with these kids and ministering to the families. As we reconcile children to family, it is so important that we reconcile them to God through Christ. That component, I think, is what makes Agape’s model work so well.