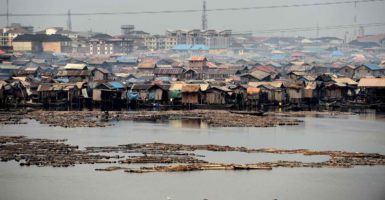 While Americans weigh arguments made by those promoting programs such as “Medicare for All” and the Green New Deal, some experts look to Africa for examples of the fates of similar socialist policies.

How such experiments failed Africa was the topic of a recent lecture at The Heritage Foundation titled “How Socialism Destroyed Africa.”

George Ayittey, a senior fellow at the Independent Institute and founder and president of the Free Africa Foundation, spoke on how nationalist leaders in Africa embraced socialism in the 1960s and rejected capitalism because they equated it with colonialism.

Heritage’s description of his talk notes that “nowhere in Africa was the socialist experiment successful.”

The wave of socialism spread over Angola, Benin, Ethiopia, Ghana, Guinea, Mali, Mozambique, Tanzania, and Zambia, among other nations on the continent.

In Zambia, over 4 million citizens fled the country once socialist policies transformed it from the breadbasket of southern Africa into a net food importer.

1. Exploitation and Suppression of the Peasant Majority.

“In many countries, the peasant farmers were exploited,” Ayittey said, citing Ghana and Gambia as examples.

“So many state-owned enterprises were … haphazardly [arranged], there was little planning, and the blunders were just horrendous,” Ayittey said.

As a result, state farms in Ghana barely produced enough to feed their own workers, let alone the nation’s population.

“And it was not only the ruling elites, but also the leaders who were pushing for the socialist agenda,” he said.

In Nigeria, for example, anyone who wanted to import something had to pay a 10 percent bribe to the minister of trade.

“Socialism as an ideology is alien to Africa,” Ayittey said.

Leaders on the continent failed to “understand their own African heritage,” he said, including that the words such as “we are” often refer to the extended family or the community:

So when you go to Africa and you ask, ‘Who owns this land?’ the African will say that the land belongs to us.

Socialism may yet destroy other African nations, Ayittey said.

“South Africa seeks to repeat the catastrophic mistakes that we made elsewhere in Africa,” he said. “You don’t have to go very far from South Africa to see the devastation that socialism left.”