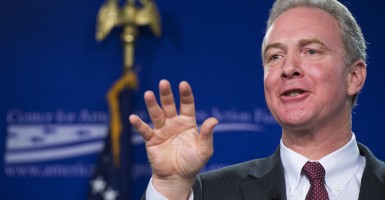 The House Budget Committee’s top Democrat is out with a new plan that he says will put more money back in the pockets of middle class Americans by transferring wealth from Wall Street and the country’s richest.

Rep. Chris Van Hollen, D-Md., revealed his “action plan” to help boost wages during a speech at the Center for American Progress in Washington, D.C., today. The crux of the proposal is tax breaks for the middle class—$2,000 per year for a couple making less than $200,000.

Over 10 years, the $1.2 trillion windfall would largely be paid for by a new fee imposed on financial transactions and a transfer of wealth from the country’s richest to those making less. Van Hollen proposed limiting tax breaks claimed by the top 1 percent of households.

Also included in the Maryland Democrat’s “action plan” are provisions to help citizens build savings accounts and lessen the pay gap between the heads of corporations and their workers.

Van Hollen, who serves as the ranking member of the House Budget Committee, pointed to low gas prices and last month’s surging stock market as proof that the economy has bounced back in recent months. However, he noted that wages have remained stagnant since the 1970s, even as workers’ productivity grew.

“It’s no wonder that so many Americans are on a treadmill or falling behind,” the Maryland Democrat said.

With the GOP controlling the House and Senate for the first time in eight years, Republican lawmakers have made tax reform a top priority for the 114th Congress. However, Wisconsin Republican Rep. Paul Ryan, head of the House’s tax-writing committee, argued Van Hollen’s plan falls short of desired policy changes.

Ryan took the helm of the Ways and Means Committee this year.

“Here in the House, our focus is going to be on cleaning up the tax code so that we can lower tax rates for all taxpayers and help create good-paying jobs, not scaring them off with punitive tax hikes,” Buck said.

Buck did not return The Daily Signal’s requests for comment.

Van Hollen told reporters today that the White House knows about his plan. However, it is not yet known whether President Obama supports the proposal.