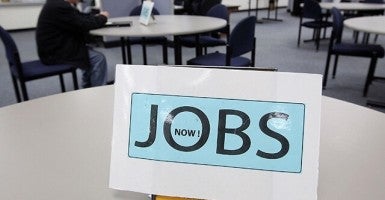 The December employment reports’ headline figures show robust labor market growth. But the details of the report give less optimistic news. The economy continues to recover but not at the rapid pace the headline figures imply.

Overall the Bureau of Labor Statistics reports that employers added 252,000 net new jobs in December, and the unemployment rate fell 0.2 percentage points to 5.6 percent – the lowest since June 2008. The construction (+48,000), food services and drinking places (+44,000), and healthcare (+34,000) sectors accounted for half of the net job growth.

Revisions to the payroll survey showed that employers added 50,000 more jobs in October and November than previously estimated. At face value, these figures are excellent economic news.

Other details in the report also sounded troubling notes. Long-term unemployment did not drop in December. As in November, 2.8 million Americans remain unemployed for more than six months.

The average duration of unemployment also remained nearly unchanged at 32.8 weeks—7 1/2 months. Americans who lose their jobs take almost twice as long to find new ones as they did before the recession started.

Indeed, the best recent economic news for Americans has come not from the labor market, but from falling prices. Over the past year the price of a gallon of gasoline has dropped by more than a dollar. This gives Americans more money to spend on things other than filling up their vehicles. If they continue, lower energy costs will raise the purchasing power of the average American household by more than $900 a year.

The economy has clearly improved over the past year, and that improvement continued in December. However the economy has not improved nearly as much as the headline employment figures suggest. American workers still face many labor market challenges.