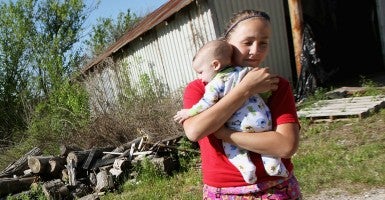 This may be a surprising statement from a bleary-eyed, number-crunching economist, but the best anti-poverty program in America may not be tax cuts, debt reduction or regulatory relief, but rather that old-fashioned institution called marriage. It turns out that poverty rates are very low among intact families and prevalent among homes without a father. Children who grow up in single-parent households are much more likely to face economic trouble as adults.

Those who cheer divorce as a form of women’s liberation, or who say that stigmatizing out-of-wedlock births is just right-wing sermonizing, just don’t get this intertwined connection between two-parent households and economic success. Sociocultural factors like the decline of marriage are leading causes of the wealth gap and the stubborn poverty trap in many low-income neighborhoods. This isn’t to say that children who grow up in broken homes can’t succeed—millions heroically do. It doesn’t mean that every marriage was meant to be; many times, divorce is the only option.

>>> This Chart Shows How the Marriage Rate Has Dropped

Still, what is irrefutable is that marriage with a devoted husband and wife in the home is a far better social program than food stamps, Medicaid, public housing or even all of them combined. This conclusion is made clear by a new eye-opening and sometimes depressing report called the Index of Culture and Opportunity by my colleagues at the Heritage Foundation. It’s conclusion: We must reshape our culture before we can ever hope to make a big dent in the number of poor households.

Some of the cultural indicators are going in a positive direction. Violent crime is down. So is the number of abortions.

In some cities such as Detroit and Newark, N.J., two of every three children are born out of wedlock.

However, in other ways, we are ripping our families and our society apart. Consider these statistics on family breakup.

According to one of the report’s scholars, W. Bradford Wilcox, “only about half of the nation’s adults are currently married, and about half of the nation’s children will spend some time outside an intact, married home.” Those numbers are much higher in low-income communities. In some cities such as Detroit and Newark, N.J., two of every three children are born out of wedlock. Name a government program that can take the place of a father.

This troubling trend appears to be a roadblock to the American Dream. One study by Harvard economist Raj Chetty and his colleagues finds that when it comes to what is preventing the economic upward mobility of poor children, “the strongest and most robust predictor is the fraction of children with single parents.”

It’s also true and often overlooked that family breakup creates a statistical illusion that we are making less economic progress than we actually are. For example, if a married couple earns $80,000, but then ends up in divorce, there are now two households earning $40,000 so it appears the economy is slipping and average household income is falling. In fact, what has slipped is the culture.

Meanwhile, birthrates are also falling. In only two of the past 40 years have birthrates exceeded replacement-level fertility of 2.1 children per couple. Who will take care of and finance the retirement of the 76 million baby boomers? Thank goodness for immigration. The population bomb that was once famously worried about by scholars such as Paul Ehrlich has become a population fizzle.

Many millennials have come to think that to pull them away from the TV, computer or Gameboy screen is an offense that is reportable to child-protective services.

Most economists agree that the sharp decline in the share of Americans between ages 18 and 64 who are working is a major economic hindrance. This isn’t just happening by chance—but rather as a result of policy and cultural shifts. The value of work is denigrated in our modern society—and welfare has been elevated. Millions of jobs are there for the taking if the unemployed and underemployed go out and obtain useful skills. But our culture too often frowns upon Americans doing what are regarded as grimy, blue-collar jobs—even though they can pay $60,000 to $100,000 a year. This may explain why it is so hard to get a plumber or carpenter or any kind of handyman these days.

We also seem to disparage the idea of young people, especially teens, working. We parents spoil our children—and I’m no less guilty than others—with leisure and money, and many millennials have come to think that to pull them away from the TV, computer or Gameboy screen is an offense that is reportable to child-protective services. This new report reminds us of the obvious: There is dignity, character-building and self-sufficiency in all forms of labor.

The Obama administration now runs TV and radio ads assuring welfare recipients they should feel no shame whatsoever in taking a handout and even tells them that the more they live off the expense of someone else (taxpayers), the better it is for the economy. Liberals are trying to bend the culture in a subversive direction. Given that last year we had 47 million on food stamps, the left is succeeding.

We economists bury ourselves in the data and formulas to try to devise policy solutions to raise the living standards of workers and families. It’s humbling to realize how much of our nation’s economic success is based on a culture of virtue. Do the right thing, as Spike Lee would put it. To save our economy from a path of decline, we need to start with a personal and national commitment to sturdy families, strong parents and a re-emergence of the Protestant work ethic. That shouldn’t be so hard.