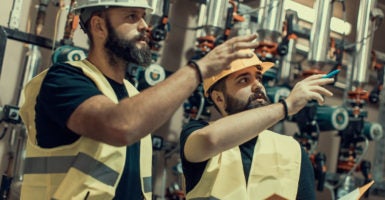 Our policies must do more to promote work for those who are able to work. (Photo: Getty Images)

Nearly one year later, the president’s budget proposal for fiscal year 2020 doubles down on this goal by renewing policies to promote work in means-tested welfare programs.

Trump’s “Budget for a Better America” proposes to strengthen work requirements in programs such as food stamps and Temporary Assistance for Needy Families, or TANF, to help work-capable adults move toward greater self-support.

Many Americans agree with the president’s goals.

Nearly 90 percent of Americans say they agree with the principle that adults who are able to work should be required to work or prepare for work in exchange for government assistance.  Americans see work requirements as one important way for welfare programs to merge compassion and fairness.

Americans also broadly recognize work as a fundamental source of well-being in their own lives.

Most report that work gives them a sense of identity, as opposed to being something they just do for a living. In fact, more than two-thirds say that they would work in a paying job even if they didn’t need the money.

Job satisfaction has been consistently high (at around 90 percent) since Gallup started polling on it in the early 1990s.

These positive feelings toward work should come as no surprise.

As social psychologist Jonathan Haidt describes in his book “The Happiness Hypothesis,” humans have a “basic drive to make this happen,” and one way this commonly manifests itself is through work.

In other words, work empowers us to connect and engage productively with our environments, and thus provides us with a sense of meaning and purpose.

Yet despite the inherent value of work, the government’s current means-tested programs generally do little to promote work. Instead, these programs often discourage work by reducing benefits as recipients earn more income.

Last year, the White House Council of Economic Advisers reported that most recipients of means-tested assistance who are capable of work actually work few hours or not at all.

Even in the program at the core of the successful 1996 welfare reform, Temporary Assistance for Needy Families, nearly half of work-capable individuals currently are idle, neither working nor preparing for work.

For example, an additional year of employment for a low-skilled adult aged 18-35 boosts his long-term future wages by 4 percent, on average. Less work, therefore, undermines his earnings capacity and ability to flourish.

Yet recent calls for expansive policies such as universal basic income are completely devoid of work provisions. The now-deleted FAQ page for the left’s Green New Deal promised “economic security” for those who are “unwilling to work.”

Advocates of universal basic income, which guarantees cash payments to everyone regardless of need, often cheer the fact that the idea decouples work from income.

However, we know from social psychology and public opinion that work has value in and of itself. Dismissing this basic idea—and failing to apply it to public programs—would be a damaging development.

The Trump administration is right to focus on work in its new budget proposal.

In addition to strengthening work in TANF and food stamps, Congress and the administration should consider reforms proposed by The Heritage Foundation to go further. A good place to start: Reform the earned income tax credit to increase work incentives.

The earned income tax credit is a broadly supported program that rewards work among low-income earners. Congress should reform the credit to encourage work more effectively, namely by linking the credit to hours worked, as well as to reduce fraud and marriage penalties.

Our policies must do more to promote work for those who are able to work. The Trump administration is doing its part, calling in its budget outline for “bold proposals to help able-bodied adults … enter the job market and work toward self-sufficiency.”

The president’s budget proposal offers a great start toward advancing a vision of greater self-reliance and human flourishing.