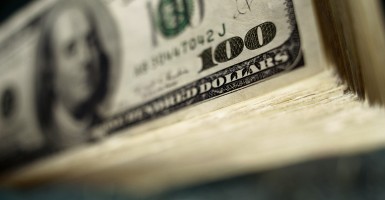 This year marks the 50th anniversary of the War on Poverty. Since that time, annual means-tested welfare spending has increased by 16-fold, now costing taxpayers nearly $1 trillion a year. And the omnibus bill keeps spending at this sky-high level.

Congress had the opportunity to make much-needed policy reforms to food stamps when it passed the farm bill earlier this year. Yet it failed to make the needed changes that would help point the program as a whole toward self-sufficiency. Instead, the bill included a work option that does not change the character of the food stamp program overall.

The most important reform to food stamps should be a work requirement that requires able-bodied adult recipients to work, prepare for work or at least look for work in exchange for receiving assistance. This would promote self-sufficiency and ensure funding is going to those most in need.

Congress also should address welfare’s out-of-control spending. Along with promoting work in programs such as food stamps, policymakers should place a cap on total means-tested welfare spending, allowing costs to increase only at the rate of inflation. A cap would make it necessary for policymakers to prioritize where welfare money is spent. A cap like this would save approximately $2 trillion over the next 10 years.

The U.S. welfare system has been expanding for decades, and its track record of helping low-income Americans achieve self-sufficiency is poor. If policymakers want to help those in need, as well as get welfare spending on a more prudent course, then they must take welfare reform seriously.