How Welfare Spending Hurts the People It’s Supposed to Help 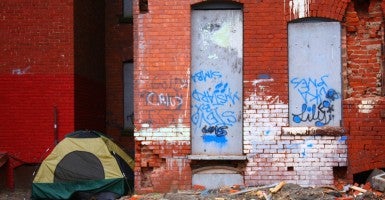 The current welfare architecture has been a disaster for struggling communities. (Photo: istockphoto)

Federal and state governments spent $1.02 trillion on welfare in 2014—an increase of $274 billion, or 36 percent, since 2003 after adjusting for inflation. At the federal level, the welfare bureaucracy spans numerous agencies and includes more than 80 different means-tested aid programs that provide cash, food, housing, medical care and social services to poor and low-income Americans. These programs range from public housing and food stamps to direct cash benefits through the earned income tax credit (EITC) and Temporary Assistance for Needy Families (TANF).

A second factor driving the growth of welfare spending is the lack of incentives built into the system for states to be good stewards of the federal programs that they administer. About 75 percent of welfare spending is federal, with the remainder contributed by states; however, states administer the programs and therefore have—but do not exercise—the capacity to constrain welfare growth. Instead, states use their discretionary authority to expand welfare while at the same time underinvesting in anti-fraud activities.

For instance, a recent report by the U.S. Government Accountability Office found that Massachusetts had just 37 fraud investigators responsible for guaranteeing that no one among the 888,000 people with SNAP benefits, the 1,273,000 receiving Medicaid, and the 92,000 with TANF cash assistance was abusing the program.

Far from being a compassionate series of programs worthy of defense against reform, the current welfare architecture has been a disaster for struggling communities and has done its gravest disservice to recipients themselves. The damage has been twofold.

First, the existing welfare system undermines work. By offering a generous system of entitlements to able-bodied adults without any obligation to work or prepare for work, welfare undermines the need and motivation for self-support. Welfare is primarily a system of one-way handouts: Only two out of more than 80 means-tested welfare programs include even modest work or training requirements.

Second, nearly all of these means-tested welfare programs impose significant penalties against marriage. For 50 years, welfare has driven fathers from the home. As a consequence, single mothers have become increasingly dependent on government aid. Meanwhile, low-income fathers, deprived of meaningful roles as husbands and breadwinners, have drifted into the margins of society. Their attachment to the labor force has deteriorated, and the tendency toward self-destructive and anti-social behavior has increased.

But the greatest victims of the anti-marriage incentives embedded in the welfare system have been children. Children raised without fathers in the home are substantially more likely to experience emotional and behavioral problems, to be expelled from or drop out of school, and to engage in juvenile and adult crime.

Nicholas Kristof in The New York Times has reflected on the unintended negative side-effects of welfare. Analyzing the Supplemental Security Income program for children, he recently wrote that “America’s safety net can sometimes entangle people in soul-crushing dependency. Our poverty programs do rescue many people, but other times they backfire.”

Costing over $1 trillion per year, the current welfare system is enormous, but much of this spending is counterproductive. Today’s welfare programs undermine work and marriage, leading to a broadening pattern of intergenerational dependence and self-defeating behaviors.

Furthermore, if work provides benefits besides monetary compensation (such as a greater connection to society), the fact that welfare discourages work may have severe and immense long-term consequences. This shift in cultural standards is already having deep effects in other areas, such as the ability to build lasting relationships that increase opportunity and general fulfillment.

Welfare should provide aid to those who genuinely need it, but it should also strive to mobilize the best efforts of the poor to help themselves. The foundations of the welfare state must be revamped to promote rather than discourage work and marriage.

To accomplish this, all able-bodied, non-elderly adult recipients of means-tested welfare benefits should be required to work, or at least prepare for work, as a condition of receiving aid. In addition, welfare’s current financial penalties against marriage must be reduced. Reforming the welfare system in this manner would best serve the interests of the poor, the taxpayers and society at large.

Originally appeared in The Heritage Foundation’s 2015 Index of Culture and Opportunity.