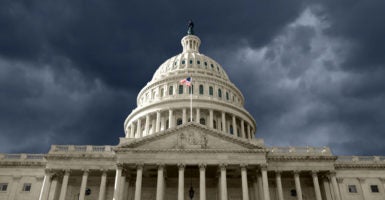 Christian Chelak is a member of the Young Leaders Program at The Heritage Foundation.

A recent report by the Committee for a Responsible Federal Budget raises concerns that proposals by this year’s presidential candidates would further increase the national debt.

America’s major entitlement programs—Medicare, Medicaid, Obamacare, and Social Security—are driving the nation’s greatest fiscal challenge, and yet Americans have heard very little about how the candidates will address these programs.

Autopilot entitlement spending on federal health care programs and Social Security, along with the net interest the nation must pay on the federal debt, are projected to consume all federal tax revenues by 2033.

Under this scenario, there would be no revenue left to fund other national priorities without significant tax hikes or immense debt burdens. Congress masks much of this entitlement spending in the budget by classifying it as “mandatory,” which allows spending on these programs to grow on autopilot every year without the need for an annual appropriation.

Spending on federal health care programs and Social Security has grown so rapidly that these programs now make up a majority of the federal budget and will comprise an even greater portion of the budget in the coming years.

Moreover, spending on both Social Security and federal health care programs is projected to drive more than half of the projected increase in spending over the next decade (assuming discretionary spending is not increased above current law). Younger generations stand to lose the most in the future as a result of fiscally irresponsible government policies.

It’s critical to addressing the root causes of high deficits and debt to recognize that the federal government has a spending problem, not a revenue problem. Although there is a need for comprehensive tax reform to create a simpler and less complex tax code, higher taxes will not solve the nation’s fiscal crisis because entitlement programs are outpacing economic growth and revenue cannot grow faster than the economy in the long run.

America’s next president should acknowledge the problem at hand and exhibit leadership to build support for necessary changes to America’s most popular, but also most unsustainable, programs.