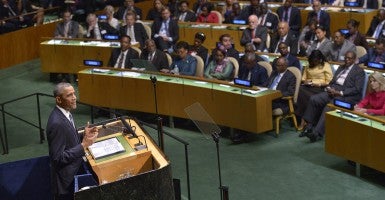 In a speech before the United Nations General Assembly today, President Obama presented his case for a global effort to defeat the Islamic State terrorist group, vowing to engage a broad coalition to dismantle the brutal jihadists’ “network of death.”

Obama delivered his address two days after he expanded the American-led air campaign against the Islamic State, also known as ISIS or ISIL, into Syria.

In a warning to the terrorists, Obama said: “Those who have joined ISIL should leave the battlefield while they can.”

But just after Obama finished his speech, a terrorism watchdog group announced that Algerian extremists allied with the Islamic State beheaded a French hostage after France ignored their demand to stop airstrikes in Iraq.

The incident reflected the challenge of beating terrorism — what the Obama administration sometimes calls violent extremism — but the president urged his international audience not to give up.

Below, The Daily Signal recaps Obama’s four-point strategy, laid out in the speech, for how the world can unite to combat terrorism:

Obama said more than 40 nations have joined a coalition to defeat the Islamic State, which he calls ISIL. He also reiterated that he will not authorize U.S. combat troops on the ground in Iraq or Syria.

“The terrorist group known as ISIL must be degraded, and ultimately destroyed,” Obama said:

There can be no reasoning – no negotiation – with this brand of evil. The only language understood by killers like this is the language of force.

“The only language understood by killers like this is the language of force,” @BarackObama says of ISIS.

Obama said the ideology of terrorists will “wilt and die” if the world confronts it by beating back militant propaganda on social media and cutting off funding mechanisms, among other measures.

“It is time for the world – especially Muslim communities – to explicitly, forcefully and consistently reject the ideology of al-Qaeda and ISIL,” Obama said, adding:

There should be no more tolerance of so-called clerics who call upon people to harm innocents because they are Jewish, Christian or Muslim. It is time for a new compact among the civilized peoples of this world to eradicate war at its most fundamental source: the corruption of young minds by violent ideology.

The president specifically referenced the #NotInMyName campaign, a social media drive started by British Muslims who say ISIS does not represent their religion.

Later today, the UN Security Council was expected to vote to adopt a counterterrorism resolution. Next year, Obama said, nations should be prepared to present concrete progress on stopping terrorism.

Though the U.S. has pledged to train and arm “moderate” Syrian rebels to confront ISIS in Syria, Obama said only political progress there could end the civil war. He called on Syrian President Bashar al-Assad to lead a peaceful transition, but did not explicitly call for Assad to step down.

“We must address the cycle of conflict – especially sectarian conflict – that creates the conditions that terrorists prey upon,” Obama said.

It’s time for a broader negotiation in which major powers address their differences directly, honestly and peacefully across the table from one another, rather than through gun-wielding proxies. I can promise you, America will remain engaged in the region, and we are prepared to engage in that effort.

In partnership with allies, the president said, he will expand education programs in the Middle East because “these investments are the best antidote to violence.”

Obama argued that engaging young people will help countries solve their own problems without relying on the U.S.

“The countries of the Arab and Muslim world must focus on the extraordinary potential of their people – especially the youth,” he said.

Ultimately, the task of rejecting sectarianism and extremism is a generational task – a task for the people of the Middle East themselves. No external power can bring about a transformation of hearts and minds.

P.S. About Gaza and Ferguson

At the end of his speech, Obama said the U.S. cannot ignore the Israeli-Palestinian conflict, calling the status quo in the West Bank and Gaza “not sustainable.”

Obama says the status quo in the West Bank and Gaza is “not sustainable.”

“So long as I am president, we will stand up for the principle that Israelis, Palestinians, the region and the world will be more just with two states living side by side, in peace and security,” Obama said.

Obama also confronted critics who might question U.S. engagement in foreign affairs when it has “plenty of problems within our own borders.”

As an example of trouble at home, Obama referred to the fatal police shooting of an 18-year-old black man in Ferguson, Mo., and the protests, looting and riots that followed.