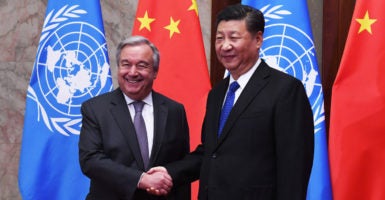 Turtle Bay is awash with heads of state this week. They’ve come to New York for the annual meeting of the United Nations General Assembly.

President Donald Trump and Secretary of State Mike Pompeo are among those in attendance, and they come with an agenda of their own. Item 1 for the Americans is to remind world leaders—in subtle and not-so-subtle ways—that Beijing is up to no good.

China is bad on many levels. And Trump will call attention to one facet of its badness that gets too little attention: the fact that the world’s leading persecutors of the Islamic religion reside in Beijing.

While many of the world’s dignitaries sat in the General Assembly to pontificate sanctimoniously about the climate, Trump chaired a roll-up-your-sleeves side session to explore ways to combat the global assault on religious liberty.

It was an opportunity to turn the spotlight on China’s abuses of Uighurs, a predominantly Muslim, Turkic group found in about a dozen countries.

About 11 million Uighurs live in the Xinjiang region of the People’s Republic of China. Beijing has rounded up at least 1 million in “camps” that exist completely outside the Chinese legal system. Meanwhile, the government systematically suppresses their religion and culture and, according to reports, has been steadily demolishing mosques.

Throughout this barbarous campaign, Beijing has lied to the world about what it’s doing.

Remarkably, most of the world has said little about the oppression. Even the Arab world has made hardly a peep.

Thankfully, the State Department refuses to be silent, drumming a steady beat on the Uighur crisis. Just this past Sunday, Pompeo urged other countries not to repatriate Uighurs to China out of concern they might be incarcerated upon arrival.

Trump’s meeting on religious freedom won’t be the only side event in which the U.S. will have a chance to remind the world that China is part of the problem. The foreign ministers of Australia, Japan, India, and the U.S. plan to meet as well. These nations have gotten together to form the “quad”—four countries who jointly advocate for a “free and open Indo-Pacific.”

While the quad isn’t aimed specifically at countering or containing China, there is no secret as to which country poses the greatest destabilizing threat in the region. Until now, the quad had never met at the ministerial level. The meeting of ministers at the General Assembly is another signal, to China and the world, that the world is fed up with Beijing’s shenanigans.

The U.S. will quietly distribute yet another message at the U.N. meeting: “Keep an eye on what China is doing at—and to—the U.N.”

Nor has the placement of Chinese within the agencies been haphazard. Beijing is specifically targeting norm and “rule setting” agencies such as the International Telecommunication Union.

Unlike many other countries, when China places its nationals in the U.N. system, it expects them to further Beijing’s interests, not the mission of the organizations for whom they work. Those who don’t face serious consequences.

Beijing does not shrink from putting a heavy thumb on its citizens. Exhibit A: Meng Hongwei, the former head of Interpol. He suddenly found himself thrown in jail, expelled from the Communist Party, and facing prosecution in China for allegedly taking bribes.

While the backstory behind Meng’s fall from Beijing’s grace remains unclear, the cloak-and-dagger way in which it happened serves as a clear reminder to Chinese citizens that they and their families are never out of the government’s reach.

If China is allowed to run wild at the U.N., only Beijing will benefit. As Heritage Foundation scholar Brett Schaefer recently wrote, China is “seeking to shift the values, programs, and policies of the U.N. in ways that benefit Chinese priorities and ideology and that undermine the values and practices that have underpinned the international system for decades.”

The U.S. is reminding its friends and allies they must keep on guard against China’s nationalistic predations, even in a transnational setting like the U.N.