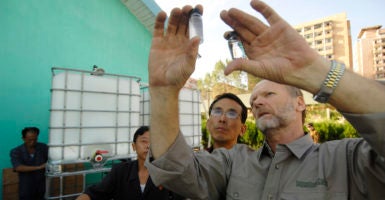 Ken Isaacs, in North Korea in 2007, runs an analysis on treated drinking water as part of a flood relief effort. The Trump administration has tapped Isaacs for a key United Nations migration post. (Photo: KenIsaacs.com)

Working as a TV journalist and assisting in humanitarian actions, Greta Van Susteren says, she has seen Ken Isaacs’ work firsthand. And she says she is convinced he is the “only one to hire” to lead the United Nations’ migration agency.

“I’ve never seen him ask anyone about their religion before he helps them,” @Greta says.

The U.N. agency, the International Organization for Migration, gets about one-third of its funding from the United States.

“If you are looking for a competent person who cares and is experienced, Kenny has done the work, and knows the [nongovernmental organizations]—Doctors Without Borders and others,” Van Susteren said of Isaacs. “He is the real deal.”

However, Isaacs is competing for the position against a career U.N. bureaucrat and a close associate of the U.N. secretary-general, while also facing a media backlash in the United States.

The State Department announced the nomination of Isaacs, 65, of Boone, North Carolina, on Jan. 31.  He currently is a vice president at Samaritan’s Purse, a Christian humanitarian relief organization run by the Rev. Franklin Graham, son of the late evangelist Billy Graham.

Mainstream media outlets—among them CNN and The Washington Post—have gone after Isaacs for some past Facebook posts, tweets, and retweets,  characterizing them as “anti-Muslim,” and also for having “denied climate change.” Some argue that climate change is a major driver of migration.

I agree w/ @NickKristof about Ken Isaacs – see below and check out https://t.co/RLlg9bJiwk pic.twitter.com/INTYCJYRnl

“I have never thought 140 characters can define someone,” Van Susteren told The Daily Signal. “I define someone by what they’ve done. I’ve never seen him ask anyone about their religion before he helps them.”

Isaacs has worked throughout the Middle East and Africa in countries with large Muslim populations.

On June 29, the Council of the International Organization for Migration, or IOM, will elect a director general for a five-year term.

“Migration is a global issue, more so today than ever before,” Isaacs told The Daily Signal in a written statement. “The International Organization for Migration is the leading agency on global migration, and it serves to help people and assist nations manage the migration in their countries.”

The U.N. set up the migration agency in 1951 to establish international management of migration by refugees and facilitate cooperation among member nations.

The winner must secure support from two-thirds of the U.N.’s member nations, or 113 of the 169. Voting continues if necessary on subsequent ballots until a winner is determined.

“We will work closely with Mr. Isaacs over the next few months leading up to the June 29th election to arrange meetings with IOM member states to discuss his qualifications for this important position and to share his vision for IOM,” State Department spokeswoman Heather Nauert said in a Feb. 1 press briefing.

“As one of IOM’s largest partners, the United States is committed to a stronger, ever-more effective and efficient IOM,” she said.

Isaacs has 34 years’ experience in humanitarian endeavors. He has directed large relief operations in more than 130 countries, and has overseen about $500 million annually in emergency assistance through Samaritan’s Purse.

He is a widower with two grown sons, one of whom also works in relief missions. The other is a Marine officer.

Isaacs helped design and implement emergency relief programs in Ethiopia, Eritrea, Somalia, Bosnia, Cambodia, Honduras, El Salvador, Kosovo, Turkey, Afghanistan, Haiti, Japan, and the Philippines. He also was part of relief efforts after the 2004 tsunami in the Indian Ocean and the 2005 Pakistan earthquake.

“With today’s complex and growing global migrations, American leadership is more important than ever to achieve the goal of having safe, orderly, and legal (often referenced as regular) migration,” Isaacs said in the written statement to The Daily Signal.

“My 30 years of experience working in complex environments with nations and helping those in crisis makes me uniquely qualified to lead IOM as its director general,” he said.

Frank Wolf, a former U.S. House member from Virginia, is another strong supporter of Isaacs’ bid for the IOM post. Wolf witnessed his work in building a hospital in Mosul in northern Iraq that treated every wounded patient, including members of the Islamic State terrorist group.

“Everyone who is attacking him has never seen him work. Have they been to the Nuba Mountains, or to Darfur, or to Mosul?” Wolf told The Daily Signal.

Among the remarks Isaacs’ critics seized on was one from last June. After a London terrorist attack, he tweeted: “If you read the Quran, you will know ‘this’ is exactly what the Muslim faith instructs the faithful to do.”

Another example came when then-President Barack Obama was negotiating the Paris climate accord in 2015. Isaacs tweeted: “The meeting in Paris next week is not going to be a rebuke to ISIS. It is going to be a dinner joke, a laughingstock, and a diversion of all the real issues.”

“He has served survivors of the Rwandan genocide, assisted Syrian refugees, and led relief efforts in dozens of countries, including Liberia, Somalia, Bosnia, Afghanistan, and Iraq,” Pittenger said in a prepared statement, adding:

Ken Isaacs is the perfect choice to lead the U.N.’s refugee and migration programs. Political correctness and Washington parlor games shouldn’t be a factor in selecting a leader who truly cares about the people whom he will serve.

If elected to the post in June, Isaacs would succeed William Lacy Swing, also an American. Swing, who assumed the post in October 2008, will serve out his second five-year term.