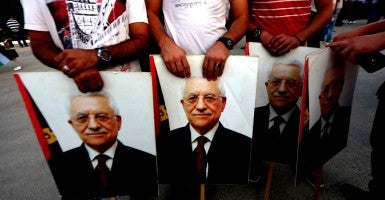 Palestinian hold pictures of president Mahmoud Abbas as they greet him upon his arrival from New York on October 2, 2015 where he attended a ceremony to mark the raising of the Palestinian flag at the United Nations headquarters. (Photo: Shadi Hatem/ZUMA Press/Newscom/Edited:Daily Signal)

After weeks of hinting that he would “drop a bombshell” at the United Nations, Palestinian Authority President Mahmoud Abbas on Wednesday threatened to stop abiding by the 1993 Oslo Accords, which have set the framework for Israeli-Palestinian peace negotiations for more than two decades.

In his speech to the U.N. General Assembly, Abbas complained that Israel had not complied with its commitments under various agreements and warned that “we will not remain the only ones committed to the implementation of these agreements, while Israel continuously violates them. We therefore declare that we cannot continue to be bound by these agreements and that Israel must assume all of its responsibilities as an occupying power, because the status quo cannot continue[.]”

Far from being a bombshell, Abbas’ speech only regurgitated the usual litany of complaints against Israel, while repeating past threats to walk away from peace negotiations. Significantly, he did not take action to back up his rhetorical threat by resigning as president or dissolving the Palestinian Authority, which was created by the Oslo Accords. Nor has he suspended security cooperation or economic ties with Israel.

One of Abbas’s advisers later clarified that Abbas’s threat to abandon agreements with Israel “does not mean that he will carry it out tomorrow.”

Abbas’s speech amounted to another attempt to ratchet up international pressure against Israel while sidestepping direct negotiations on a final settlement, which he has avoided for years. Abbas himself violated the Oslo Accords, by pushing for unilateral Palestinian statehood through the U.N.

Last year in his speech to the U.N. General Assembly he declared that: “The hour of independence of the state of Palestine has arrived.”

But his end run around direct talks with Israel led to a diplomatic dead end. He won an upgraded status for Palestinians at the U.N. as a non-member observer state, but that did nothing to help advance Palestinian efforts to build an actual state, which can only come through direct negotiations with Israel.

Abbas is increasingly unpopular with his own people. A recent poll found that two-thirds of Palestinians want him to resign. One of these days, the 80-year-old Abbas, who is 11 years into a four-year term as president (due to the failure of Palestinians to schedule new elections), may actually do so.