Why Is Syria Set to Lead UN Disarmament Forum on Chemical Weapons? 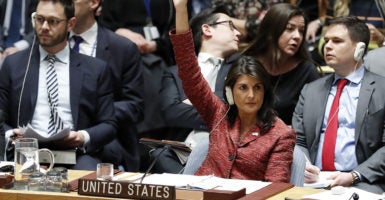 In a fact that may surprise those aware of Syria’s use of chemical weapons against its own people, the Arab nation is scheduled to chair next month’s United Nations disarmament forum on chemical and nuclear weapons.

That report from the Geneva-based organization UN Watch comes as the Trump administration considers its options following the Assad regime’s chemical attack Saturday on civilians that left over 40 dead.

Images of dead or suffering men, women, and children flooded the internet.

Only a monster targets civilians and then ensures that there are no ambulances to transfer the wounded, no hospitals to save their lives, no doctors or medicine to ease their pain.

Each and every one of the nations in this [U.N. Security Council] are on record opposing the use of chemical weapons. There can be no more rationalizations for our failure to act.

The Daily Signal: How did Syria wind up chairing this conference?

Under the Clinton administration, the Conference on Disarmament unanimously agreed in 1995 to increase the membership by 23 countries, including North Korea and Syria.

The presidency of the conference rotates alphabetically among the membership, with each country holding the gavel of four weeks. Syria will assume the presidency at the end of May.

And now this: after gassing its own people to death, #Syria to chair UN disarmament forum on chemical & nuclear weapons; watchdog calls on US & EU to walk out https://t.co/s0JfV2xRZP via @unwatch
cc: @nikkihaley @theresa_may @EmmanuelMacron @AmbJohnBolton

A: As it did in 2013, when Iran assumed the presidency of the Conference on Disarmament, the U.S. should refuse to send an ambassador to any meeting presided over by Syria.

In fact, the U.S. should make this standard practice when Iran, North Korea, Syria, or another proliferating state assumes the presidency and insist that these states be removed if membership of the conference if it is adjusted in the future.

Q: How do we maintain a presence?

A: Since the Conference on Disarmament operates by consensus, it is important that the U.S. be represented, at least at a low level, to oppose the adoption of a program of work or substantive deliberations that are not in the interest of the U.S.

Q: Realistically, what could come out of this forum?

A: Very little. The Conference on Disarmament has been largely ineffective and deadlocked since the 1990s due to disagreement among the membership over the agenda. Since the conference acts by consensus, this means very little is accomplished.

Its last substantive product was the Comprehensive Nuclear Test-Ban Treaty in 1996, which the Senate overwhelmingly rejected in 1999 and the U.S. has not ratified.

Q: What should we keep in mind?

A: Because of the rotational nature of the conference presidency, it is easy for the U.N. Secretary-General [António Guterres] and others to dismiss this as a non-issue.

It is not. It is disgraceful that governments currently violating the conference’s core purpose and reason for being are allowed to use it to normalize their behavior. The U.S. should highlight these issues each time they arise in the Conference on Disarmament or other U.N. bodies.