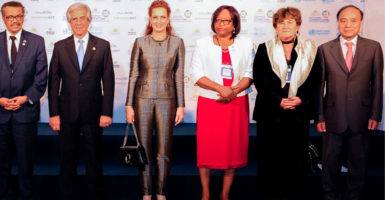 Even before he took office as secretary-general of the International Telecommunication Union, Houlin Zhao, at right, had sought to insulate China from agreed practices on governing the internet. Pictured with Zhao at the Global Conference on Noncommunicable Diseases Oct. 18, 2017, in Montevideo are, from left, Tedros Adhanom Ghebreyesus, secretary-general of the World Health Organization; Uruguayan President Tabare Vazquez; Moroccan Princess Lalla Salma; Carissa Etienne, president of the Pan American Health Organization; and Zsuzsanna Jakab, WHO's European regional director. (Photo: Miguel Rojo/AFP/Getty Images) 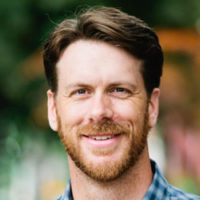 Chinese influence in the United Nations and its affiliated international organizations has been expanding significantly over the past decade.

China watchers long have hoped that the communist nation’s integration into the international system would “normalize” China. They hoped China would come to appreciate the value of observing international rules and norms and become freer economically and politically.

However, it is now clear that the reverse actually has happened and that China is influencing those organizations far more than they are moderating China.

The most glaring example is the obsequious treatment China received from the World Health Organization despite its lack of transparency and cooperation on COVID-19, the disease caused by the new coronavirus. However, that is hardly the only example.

Even before he became secretary-general of the union, Zhao had sought to insulate China from agreed practices on internet governance. He actively attempted to undermine the role of ICANN (the Internet Corporation for Assigned of Names and Numbers), the private, nonprofit entity responsible for coordinating key processes and procedures necessary for the internet to operate smoothly and doing so through a governance structure with multiple stakeholders.

Zhao, who was born in China, pressed Chinese companies and internet service providers to go solely through Beijing’s National Internet Registry rather than the Asia-Pacific Network Information Center, which ICANN processes entail.

Since becoming secretary-general of the International Telecommunication Union, Zhao has championed Beijing’s priorities in violation of his obligation to be a neutral international civil servant. For example, under his leadership:

—Earlier this year, the Financial Times noted how the International Telecommunication Union has provided a forum for Chinese proposals for a “radical change to the way the internet works … which critics say will also bake authoritarianism into the architecture underpinning the web.”

—In 2019, Zhao vowed to join hands with China on its Belt and Road Initiative, saying: “It’s the grand guide and platform for China’s foreign aid plans. It’s an express train that once you get on, you can join forces with China and develop along with the country.”

Most recently, Zhao has dismissed U.S. security concerns about the involvement of the Chinese telecom company Huawei in developing 5G mobile networks as a “loser’s attitude.”

“Those preoccupations with Huawei’s equipment, up to now there is no proof so far,” Zhao said. “I would encourage Huawei to be given equal opportunities to bid for business, and during the operational process, if you find anything wrong, then you can charge them and accuse them. But if we don’t have anything then to put them on the blacklist—I think this is not fair.”

As a Chinese company, Huawei is subject to China’s national security and cybersecurity laws, which mandate government access to all information that transits, is stored on, or in any other way touches that nation’s networks—even if the information is collected outside China.

Moreover, because of China’s focus on integrating civilian and military industrial sectors, its products are more likely to be exploited by the People’s Liberation Army.

This only exacerbates a proven history of low cybersecurity standards, stealing intellectual property and data, and deliberately circumventing international sanctions on rogue nations such as Iran.

Upon appointment, International Telecommunication Union officials, including the secretary-general, take an oath of office. Zhao was sworn in with the following pledge:

I solemnly swear to exercise in all loyalty, discretion and conscience the functions entrusted to me as a staff member of the International Telecommunication Union; to discharge these functions and to regulate my conduct with the interest of the Union only in view, without seeking or accepting instructions or assistance from any Government or other authority external to the Union in regard to the accomplishment of my duties.

The member states of the International Telecommunication Union should remind Zhao that he reports to them, not to Beijing.