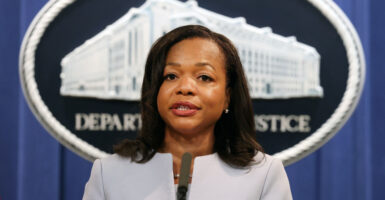 Kristen Clarke, assistant attorney general for civil rights at the Department of Justice, is a vocal abortion proponent who has repeatedly expressed her support for preserving Roe v. Wade. She also oversees investigations into violations of the Freedom of Access to Clinic Entrances Act—which she has used to charge 26 pro-life individuals this year.

“It appears she’s violating her oath of office and she’s violating her duty, which is to fairly administer the law regardless of political views,” John Daukas, former acting assistant attorney general for civil rights in the Trump administration, told The Daily Signal. “She appears only to be prosecuting groups that she doesn’t like, doesn’t agree with.”

Few would expect such a high-ranking DOJ official to retain the slew of political hot-takes and public condemnations that litter Clarke’s social media from before she assumed her current role. She has called Alliance Defending Freedom a “hate group” and Liberty University a “fundamentalist Christian school.” She has said that those protesting Dr. Anthony Fauci should be “publicly identified and named, barred from treatment at any public hospital if/when they fall ill and denied coverage under their insurance.”

She has hurled insults at Republican politicians from Lisa Murkowski to Donald Trump, supported the allegations of Christine Blasey Ford, and has submitted testimony to the U.S. Senate that Amy Coney Barrett was unfit to serve as a justice because she would likely rule to overturn Roe v. Wade (which Clarke vociferously and publicly supported). She has frequently critiqued pro-life laws and courts that upheld them, branding a law protecting Down Syndrome babies “draconian.”

Significantly (in light of the scores of recent attacks on pro-life centers following the Roe v. Wade leak), Clarke called pro-life pregnancy care centers “predatory” and “fake clinics,” claiming they are part of a “coordinated strategy to tear down Roe” (as The Washington Free Beacon’s Chuck Ross reported).

Clarke has heavily toned down her activist rhetoric since her nomination to the Justice Department. The Daily Signal reached out to her multiple times through various avenues to obtain comment for this story, but a spokesperson declined to comment on her behalf.

Her politically charged comments call into question “her ability to impartially enforce the law,” according to Roger Severino, the former director of the health department’s Office for Civil Rights who also formerly served as a trial attorney in the DOJ’s Civil Rights Division.

“A key pillar of law enforcement is that you go where the facts and the law lead you, and you don’t insert politics to drive your prosecutorial decision-making,” added Severino, the vice president of domestic policy at The Heritage Foundation. “And with this DOJ, starting with Attorney General Merrick Garland and Kristen Clarke, we’ve seen politicization on an unprecedented level.” (The Daily Signal is Heritage’s news outlet.)

Clarke studied at Harvard University, where she argued in a 1994 letter to the student newspaper that black people have “greater mental, physical and spiritual abilities” than white people. She also attended Columbia Law School, during which time she circulated the poet Amiri Baraka’s essay defending a cop killer and comparing the police to the KKK, later reports revealed.

She also faced heavy criticism during her confirmation process for inviting antisemitic speaker Tony Martin to campus during his time at Harvard. His book described the “escalating Jewish onslaught” against black people.

Pro-abortion groups described her as “exactly the accomplished civil rights attorney who will bolster civil rights enforcement and ensure equal justice for all,” when President Joe Biden nominated her for the Civil Rights Division position in 2021.

“Kristen Clarke has fought tirelessly for civil rights & liberties as a vigorous, honest enforcer of the law,” Sen. Richard Blumenthal, D-Conn., said of her in May 2021.

Republicans like Texas Sen. Ted Cruz were quick to label her “one of the most radical nominees ever put forward for any position in the federal government.”

DOJ website language states that “the FACE Act is not about abortions,” emphasizing that the “statute protects all patients, providers, and facilities that provide reproductive health services, including pro-life pregnancy counseling services and any other pregnancy support facility providing reproductive health care” (language likely leftover from the Trump administration, since it includes the word “pro-life”).

The FACE Act has typically been used to prosecute those accused of attacking abortion clinics, but its language also protects pro-life organizations under the term “reproductive health services,” Daukas, the former acting assistant attorney general for civil rights, said.

Daukas emphasized that the FACE Act was crafted with balance by people on both sides of the aisle—those with concerns about pro-lifers protesting outside of abortion clinics and those seeking to protect religious institutions and crisis pregnancy centers while also protecting First Amendment rights.

“Through FACE Congress struck a balance between protecting access to abortion and access to pro-life counseling and protection of free speech and freedom of religion,” he said. “Assistant Attorney General Clarke has upended that careful balance through biased implementation of the law.”

Clarke leads the National Task Force On Violence Against Reproductive Health Care Providers, established in 1998 after a New York abortionist was shot and killed. That task force is supposed to coordinate investigations and prosecutions of “abortion violence.”

At least 86 Catholic churches and 74 pregnancy resource centers and other pro-life organizations have been attacked since the May leak of the draft Supreme Court opinion overturning Roe v. Wade, according to a Catholic Vote tracker.

Many of these buildings have been vandalized with threats such as, “If abortions aren’t safe, neither are you,” making the attacks incidents of suspected pro-abortion violence.

The DOJ’s Civil Rights Division refused to say whether it is prosecuting any of these cases under the FACE Act, urging The Daily Signal to reach out to the FBI. A DOJ spokeswoman would not say whether the FBI has referred a single pro-abortion violence case to the DOJ to be prosecuted under the FACE Act.

These agencies are at liberty to share how many investigations they are conducting on the FACE Act and how many abortion clinics they are investigating versus pregnancy resource centers, Severino said, noting that the “fact that they’re not strongly suggests that it’s all one-sided.”

The FBI has previously said that it is investigating attacks and threats to “pregnancy resource centers, faith-based organizations, and reproductive health clinics” as “potential acts of domestic violent extremism, FACE Act violations, or violent crime matters.”

But the bureau repeatedly refused to tell The Daily Signal how many of its investigations actually involve pregnancy centers and faith-based institutions, nor would it reveal how many attacks on pro-lifers it is investigating as potential violations of the FACE Act.

A list of recent cases on the Justice Department website indicates that the DOJ has not prosecuted a single attack on a pro-life organization or church under the FACE Act. That list includes seven enforcements of the FACE Act in 2022 alone against pro-life activists: Clarke’s division has charged 26 individuals with FACE Act violations since the beginning of the year.

Based on the DOJ’s public releases, Daukas told The Daily Signal, Clarke appears to be “enforcing the statute in a biased, political fashion, against groups with whom she disagrees and failing to prosecute groups she favors.”

“Such favored groups are in some cases firebombing and committing acts of violence against pro-life and religious institutions,” he added. “And that’s a violation of her oath of office.”

In 2022, the Justice Department has taken action against the following individuals:

The number of those charged in 2022 is much higher than the number of individuals charged with FACE Act violations in previous years, such as in 2021, when four individuals were charged.

Between 2017 and 2011, during former President Barack Obama’s administration, nine individuals were charged. Severino, who was working as a trial attorney in the Civil Rights Division during the Obama administration, said that “even then” it was evident that the DOJ was “taking marching orders from Planned Parenthood” and had “begun to use political prosecutions to go after political enemies.”

According to another high-ranking former Trump Justice Department official, the department’s prosecution of individuals like pro-life activist Mark Houck is “atypical” of its previous FACE Act prosecutions.

“Typically, the Justice Department prosecutes cases that involve things like blowing up an abortion clinic, or threatening to blow up a clinic, serious violence or threats to bodily injury … not a shoving match that occurred or something of that nature that is alleged in the Houck case,” said the former DOJ official, who asked to remain anonymous to protect his privacy.

Houck, whom armed FBI agents arrested early in the morning in front of his family, is accused of assaulting an abortion clinic escort while praying outside the abortion clinic. His attorney maintains that Houck was defending his young son from the escort’s alleged harassment.

A Response to Roe v. Wade

What prompted this uptick in charges? Likely the overturn of Roe v. Wade, according to the Biden administration.

Shortly after the momentous June decision, the Justice Department announced the establishment of the Reproductive Rights Task Force “to identify ways to protect access to reproductive health care.”

“Right after the Dobbs decision, DOJ announced a task force to push the abortion agenda,” Severino said. “This is a fruit of that poisonous route. They have been strategizing on how they could go after pro-lifers to appease the radical left abortion base that elected Biden and led to people like Kristen Clarke having any sort of power.”

“They are preferring to give cover to the abortion lobby when the real violations are happening all over the country and they do nothing,” he added.

On May 27, 2022, the FBI uploaded a National Task Force on Violence Against Reproductive Health Care Providers resource booklet for “reproductive healthcare providers and their staffs” (dated March 2022) that discusses “incidents of violence and threats towards reproductive health care providers,” encouraging abortion providers to forge relationships with law enforcement, FBI, and U.S. attorney’s offices to “establish a liaison.”

The booklet specifically notes that it is providing guidance against “anti-abortion extremist activity” and provides lengthy lists of ways to protect abortion clinics and staffers.

The White House referred requests for comment for this story to the Justice Department.