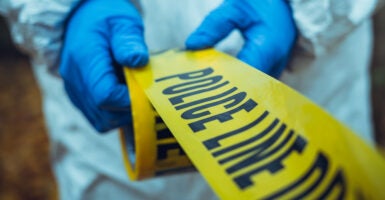 In May, Wisconsin Family Action was set ablaze and vandalized. Now the organization says the FBI hasn't been in touch for months. (Photo: Getty Images)

A Wisconsin pro-life organization set ablaze and vandalized with the message “If abortions aren’t safe, then you aren’t either” says it has not communicated with the Federal Bureau of Investigation about the horrifying attack since May, when the attack originally occurred.

Wisconsin Family Action, the 501(c)(4) arm of Wisconsin Family Council, said earlier this year that the clinic was attacked by an “elitist anarchist group,” Anarchy 1312, that reportedly threw two Molotov cocktails into the office, broke windows, and firebombed the building early in the morning on Mother’s Day. It also graffitied the building with the message: “If abortions aren’t safe, then you aren’t either.”

The militant abortion group Jane’s Revenge claimed responsibility for the attack, calling the firebombing “just a warning” and promising that more would follow if pro-life centers do not cease their work: “We demand the disbanding of all anti-choice establishments, fake clinics and violent anti-choice groups within the next 30 days.”

The attack was so vicious that it prompted President Joe Biden’s White House to issue a statement condemning such violence.

“President Biden strongly condemns this attack and political violence of any stripe,” the White House statement said. “The president has made clear throughout his time in public life that Americans have the fundamental right to express themselves under the Constitution, whatever their point of view. But that expression must be peaceful and free of violence, vandalism, or attempts to intimidate.”

But in spite of the national coverage the incident received, and the ongoing threatening or harassing messages the center has received, it is unclear whether authorities are actively investigating the attack.

Wisconsin Family Council and Action President Julaine Appling shared with The Daily Signal that her organization has heard “nothing from the FBI after they left our office the day of the attack, May 8.”

Appling is not sure whether the FBI and ATF took pictures but presumes that they did since “they were behind closed doors all day long.” Neither agency immediately responded to requests for comment for this story.

“Never anything in writing,” she added. “[The FBI] called one time to check on a phone number … that was mid to late May. Crickets since then.”

“Nothing from ATF,” she added, noting that it is taking care of the physical evidence. “Zero.”

The FBI would not confirm to The Daily Signal that it is investigating the attack.

Frustrated by authorities’ apparent lack of interest in the attack, Wisconsin Family Action had filed its own FOIA request for the Madison Police Department’s communications on the attack (local officials had sparked national backlash with statements responding to the attack that stressed their pro-abortion stances).

“Wisconsinites deserve to feel safe, no matter their political views,” Appling said in a statement when the group sent its FOIA. “We certainly don’t want to think that there would be any prejudice by any law enforcement agency based on our particular beliefs and values, but not hearing anything from MPD or any other law enforcement agency since early June certainly raises questions.”

At least 83 Catholic churches and 73 pregnancy resource centers or pro-life organizations have been attacked since the draft opinion was leaked in May, according to Catholic Vote trackers. Some of these pro-life centers and organizations have told The Daily Signal that they have not heard anything from federal authorities.

The FBI confirmed this week to The Daily Signal that it is investigating “a series of attacks and threats targeting pregnancy resource centers, faith-based organizations, and reproductive health clinics” as “potential acts of domestic violent extremism, FACE Act [Freedom of Access to Clinic Entrances Act] violations, or violent crime matters, depending on the facts of each case.”

When The Daily Signal pressed the FBI for more information last week, national press officer Christina Pullen repeatedly said the FBI does “not have any information to add” to its old statement. She also would not say whether the FBI has made any arrests related to these attacks and threats.

The bureau’s refusal to provide more information on the matter is particularly notable in light of the FBI’s dramatic arrest of Mark Houck, a Catholic father who allegedly pushed a pro-abortion activist for allegedly harassing his son while they were praying outside an abortion clinic. And on Wednesday, the Justice Department charged 11 more pro-life activists with violations of the Freedom of Access to Clinic Entrances Act for blocking the entrance of an abortion clinic in 2021.