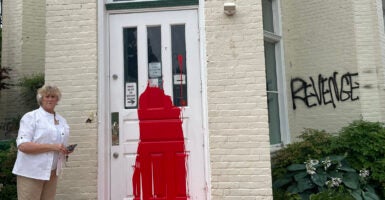 A vandal or vandals dumped a bucket of red paint on the Washington, D.C.-based Capitol Hill Crisis Pregnancy Center in June, spray-painted the words "Jane's Revenge" on the wall of the center, and egged the windows. (Photo: Mary Margaret Olohan for The Daily Signal)

The Federal Bureau of Investigation will not share whether it has made any arrests related to attacks on pro-life centers, organizations, and Catholic churches following the leak of the Supreme Court opinion overturning Roe v. Wade.

At least 83 Catholic churches and 73 pregnancy resource centers or pro-life organizations have been attacked since the draft opinion was leaked in May. And some of these pro-life centers and organizations have told The Daily Signal that they have not heard anything from federal authorities.

The FBI confirmed this week to The Daily Signal that it is investigating “a series of attacks and threats targeting pregnancy resource centers, faith-based organizations, and reproductive health clinics across the country, as well as to judicial buildings, including the U.S. Supreme Court.”

“The incidents are being investigated as potential acts of domestic violent extremism, FACE Act [Freedom of Access to Clinic Entrances Act] violations, or violent crime matters, depending on the facts of each case,” the statement said. “The FBI takes all violence and threats of violence very seriously and we are working closely with our law enforcement partners at the national, state, and local levels to investigate these incidents.”

“It’s open season, and we know where your operations are,” Jane’s Revenge warned over the summer.

When The Daily Signal pressed the FBI for more information this week, referencing the recent arrest of a Catholic, pro-life activist, national press officer Christina Pullen repeatedly said the FBI does “not have any information to add” to its old statement. She also would not say whether the FBI has made any arrests related to these attacks and threats.

The FBI would not address these questions. The bureau’s refusal to provide more information on the matter is particularly notable in light of the FBI’s dramatic arrest of Mark Houck, a Catholic father who allegedly pushed a pro-abortion activist for allegedly harassing his son while they were praying outside an abortion clinic.

This arrest might fall under the FBI’s reference to attacks and threats on reproductive health clinics, but the bureau would not comment on Houck to The Daily Signal.

Meanwhile, pro-life centers and organizations that were attacked over the summer in the fallout of the Dobbs v. Jackson Women’s Health Organization leak, like Concerned Women for America, tell The Daily Signal that they have not heard from the FBI. The organization’s office was vandalized by a man who reportedly ripped up its security system, flipped off its camera, and urinated on the door (prompting the group to file a hate crime report with the FBI).

“We know that President [Joe] Biden specifically singled out abortion clinics for protection from the federal government, but we have not heard the Biden administration say one word about supporting pregnancy care centers,” Concerned Women for America President Penny Nance said in a phone interview.

“I agree that it’s domestic terrorism that is impacting these pregnancy care centers, but I don’t have any suggestion from any of them or any of our own experience in which the FBI came to our defense,” she added.

A vandal or vandals dumped a bucket of red paint on the Washington, D.C.-based Capitol Hill Crisis Pregnancy Center in June, spray-painted the words “Jane’s Revenge” on the wall of the center, and egged the windows. The center is filled with baby clothing, baby food, and resources for D.C.-area parents who come to the center hoping they can find help rather than resorting to abortion.

The Metropolitan Police Department has increased its presence around the center, Director Janet Durig told The Daily Signal on Thursday morning, and though the center itself has increased security measures, there have still been several incidents involving a male allegedly beating on the center’s windows that have made her feel very uncomfortable.

Durig praised the D.C. police for keeping her center safe. But she said that she has not heard from the FBI and does not believe that the vandalism is being investigated by federal authorities.

And on Thursday morning, D.C. police told The Daily Signal that its investigation into the June vandalism has been suspended pending further evidence—meaning that if the FBI is not investigating this attack, no one is.

Meanwhile, the Biden Justice Department is heavily focused on protecting abortion clinics from pro-life activists who pray outside or seek to persuade women not to abort their unborn babies. On Wednesday, the Justice Department charged 11 more pro-life activists with violations of the Freedom of Access to Clinic Entrances Act for blocking the entrance of an abortion clinic in 2021.

“Reproductive health care providers must be free to carry out their work free from interference or intimidation,” said Assistant Attorney General Kristen Clarke of the Justice Department’s Civil Rights Division in a Monday statement. “The Justice Department is committed to enforcing federal law to protect providers and all people seeking access to reproductive health care across our nation.”

She did not immediately respond to requests for comment from The Daily Signal.

“Today’s #SCOTUS ruling striking down CA law that required crisis pregnancy centers to provide factual information about state-offered services, including abortions, will have harmful consequences for women, especially women of color who are often targeted by predatory CPCs [crisis pregnancy centers],” she tweeted in 2018.

“Make no mistake,” she tweeted later. “Today’s decision at the #SCOTUS striking down a CA disclosure requirement for crisis pregnancy centers is part of a coordinated strategy to tear down #RoevWade. The anti-choice movement will stop at nothing. #EndTheLies #ExposeFakeClincs”

“DOJ should be working to fight discrimination and protect the rights of vulnerable communities,” she said at the time. “Instead, [then-Attorney General] Jeff Sessions is launching a Religious Liberty Task Force to make it easier for people to use religion to mask their discriminatory goals. Shameful.”