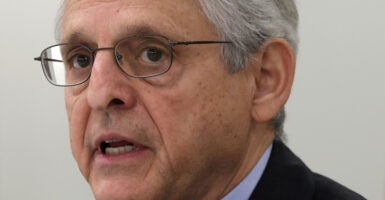 The Justice Department has charged yet another pro-life activist with violating the Freedom of Access to Clinic Entrances Act—this time, an activist from the same pro-life group that discovered preemie-sized aborted babies’ remains outside a Washington, D.C., abortion clinic.

A D.C. federal grand jury’s two-count superseding indictment charged 25-year-old Herb Geraghty with conspiracy against rights and FACE Act offenses for blocking the entrance to an abortion clinic in October 2020, the Justice Department said in a release. The pro-life activists had blockaded the entrance to the abortion clinic, the D.C.-based Washington Surgi-Clinic, to “prevent women from entering the clinic to murder their children.”

“This is a clear abuse of power and a sign that the Biden administration is using the Department of Justice to attack political targets—particularly those of us who believe in the right to life for all human beings,” Geraghty, a member of the Progressive Anti-Abortion Uprising, told The Daily Signal.

Geraghty has “not yet” been arrested, the activist said, adding: “I am hoping they let me self-surrender, but no confirmation either way yet.”

“According to the superseding indictment, as part of the conspiracy, Geraghty communicated with Handy to plan the blockade,” the Justice Department said in a release. “Handy made lodging arrangements for her co-conspirators from Michigan, New York, and Boston, and she obtained a monetary donation to pay for an Airbnb reservation for herself and Geraghty. According to the indictment, Geraghty and several co-defendants traveled from out-of-state to Washington, D.C., to participate in the clinic blockade.”

“Once the blockade was established,” the release continued, “Darnel livestreamed footage of his co-defendants’ activities. The indictment also alleges that all 10 defendants violated the FACE Act by using a physical obstruction to injure, intimidate, and interfere with the clinic’s employees and a patient, because they were providing or obtaining reproductive health services.”

Each of the defendants could face up to 11 years in prison, three years of supervised release, and a fine of up to $260,000 if they are convicted.

The Justice Department did not immediately respond to a request for comment from The Daily Signal. The charges against Geraghty come amid national outcry over the department’s arrest of other activists, including two pro-life fathers of large families, charged in separate instances with violations of the FACE Act.

Photos reviewed by The Daily Signal provided by the Progressive Anti-Abortion Uprising indicate that the boxes were from the abortion clinic and were on their way to be incinerated at Curtis Bay Medical Waste Facility in Baltimore.

Members of Progressive Anti-Abortion Uprising told The Daily Wire at the time that the box they intercepted at the clinic contained the five preemie-sized aborted babies as well as 110 mostly pulverized babies aborted in the first trimester.

The activists told The Daily Signal they found the aborted babies’ bodies on March 25. At their request, Bukovinac told The Daily Signal, their attorney sent a letter to the the D.C. Metropolitan Police Department on March 29 informing the police that they had the baby bodies and wished to turn them over to authorities for an investigation.

“However, the next day, Lauren was indicted on unrelated charges for a nonviolent direct action that occurred in October 2020—at the very abortion facility where they had received the remains just days prior,” Geraghty said in a blog post about Handy’s arrest, describing how the FBI arrested Handy on March 30, charging her and nine others with federal civil rights offenses.

“She was arrested by the FBI outside her apartment and released on recognizance hours later,” Geraghty said. “Later that day, as arranged by the attorney, the D.C. police came to collect the bodies of the remaining babies.”

“The Metropolitan Police Department (MPD) is in consultation with the United States Attorney’s Office for the District of Columbia on both matters,” Bowser said at the time, adding that both the October 2020 incident and Handy’s involvement in finding the babies’ bodies are “potentially, serious violations of federal law.”

The mayor did not respond to requests for comment from The Daily Signal.

Metropolitan Police Department Public Information Officer Sean Hickman confirmed to The Daily Signal in September that there is still “an active investigation” into the babies’ bodies.

The abortionist who operates out of Washington Surgi-Clinic, Dr. Cesare Santangelo, was allegedly recorded saying in 2012 that if babies were born alive during his abortions, he would allow them to die. His comments, and the photographs of gruesome wounds on the babies’ bodies, have prompted concerns from pro-life activists and lawmakers that Santangelo used illegal partial-birth abortion techniques to kill the babies.

“Horrifically, Washington, D.C., has no limits on legal abortion, other than the few federal laws protecting the unborn,” wrote Geraghty. “However, this abortionist has been recorded saying that if a baby were to be born alive during a post-viability abortion procedure at his clinic, he would refuse to provide medical care to the infant in violation of federal law.”

Washington Surgi-Clinic has maintained a stony silence, directing inquiries to the National Abortion Federation, and Curtis Bay Medical Waste Facility denied that the incident occurred (in spite of photographs showing the boxes in which the remains were allegedly found covered in the company’s labeling).

The Progressive Anti-Abortion Uprising said in a statement that Geraghty is the first atheist to have been charged with alleged violations of the FACE Act.

“For the nearly three decades since FACE was enacted in 1994, it has rarely been used to prosecute life advocates,” the Progressive Anti-Abortion Uprising said in an Instagram post. “Yet in 2022 alone, under [the Joe Biden/Merrick Garland Justice Department], there have been at least 22 peaceful pro-life activists indicted under the act.”

The Justice Department “has charged the defendants with conspiring to ‘deny civil rights,’ but the Supreme Court has made it clear that abortion is not a constitutional right,” the organization added.

Geraghty told The Daily Signal that “there is nothing inherently religious about the pro-life cause.”

“The science alone makes it clear that a human being’s life begins at conception and that abortion ends the life of that unique human being,” Geraghty said. “I embrace a consistent life ethic and therefore oppose aggressive violence against human beings in every circumstance. No one ever asks me, ‘If you’re an atheist, why do you oppose the death penalty or police brutality or war?’ It is only in the context of abortion that suddenly the idea that an atheist would defend human rights is questioned but that shouldn’t be the case.”

“You do not need to believe in any one religion to think that dismembering human babies is wrong and that pregnant people deserve the support they need to birth those children in safe and sustainable communities,” Geraghty added. “That should be common ground that we all share, regardless of religious beliefs or political ideology.”