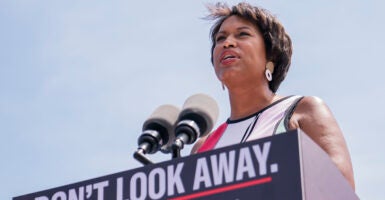 Six months later, the Metropolitan Police Department of Washington, D.C., is still investigating the deaths of five preemie-sized aborted babies that pro-life activists say they discovered in boxes outside a D.C. abortion clinic.

Pictures purportedly showing the mangled bodies of the five aborted babies have inflamed fears that a D.C. abortionist is performing illegal partial-birth abortions right in the nation’s capital, where no specific abortion laws are currently in place.

Local authorities have been cautious in addressing the fetal remains—gruesome reminders to Washington, D.C., of what, exactly, occurs during an abortion.

And in the aftermath of the overturning of Roe v. Wade, the matter seems to have been all but forgotten.

Metropolitan Police Department Public Information Officer Sean Hickman confirmed to The Daily Signal this week, however, that there is still “an active investigation” into the baby bodies. Photos reviewed by The Daily Signal provided by the Progressive Anti-Abortion Uprising indicate that the boxes were from the Washington Surgi-Clinic and were on their way to be incinerated at Curtis Bay Medical Waste Facility in Baltimore.

The Daily Signal first learned that authorities were investigating the gruesome deaths of the babies through an Oversight Project Freedom of Information Act request for records showing how the police department reached its conclusion that the babies had died as a result of legal abortions.

“About a month ago, D.C. Metropolitan Police recovered the remains of five preborn children apparently from the Washington Surgi-Clinic in Washington, D.C., a facility operated by the late-term abortionist Dr. Cesare Santangelo,” the request noted. “Instead of ensuring that the horrific deaths of these children were properly investigated, Metropolitan Police made the assumption that each child died as the result of a legal abortion.”

Metropolitan Police Department Freedom of Information Act specialist Shania Hughes told the Oversight Project in late April that its queries about the department’s conclusions were part of “an open investigation.”

The Oversight Project filed the FOIA request following April 2022 letters led by Sen. James Lankford, R-Okla., as well as from Sen. Mike Lee, R-Utah, and Rep. Chris Smith, R-N.J., calling on the Department of Justice and the FBI to investigate whether the babies’ deaths violated the law and asking D.C. Mayor Muriel Bowser to commit to probing the deaths.

Bowser finally addressed the matter in April, responding to Lankford’s letter, and singling out Progressive Anti-Abortion Uprising activist Lauren Handy, who has been charged and indicted by the FBI in a separate October 2020 incident, in which she pushed her way into an abortion clinic.

“The Metropolitan Police Department (MPD) is in consultation with the United States Attorney’s Office for the District of Columbia on both matters,” Bowser said at the time, adding that both the October 2020 incident and Handy’s involvement in finding the babies’ bodies are “potentially, serious violations of federal law.”

The mayor did not immediately respond to a request for comment from The Daily Signal.

The abortionist who operates out of Washington Surgi-Clinic, Santangelo, was allegedly recorded saying in 2012 that if babies were born alive during his abortions, he would allow them to die. His comments, and the photographs of gruesome wounds on the babies’ bodies, have prompted concerns from pro-life activists and lawmakers that Santangelo used illegal partial-birth abortion techniques to kill the babies.

Washington Surgi-Clinic has maintained a stony silence, directing inquiries to the National Abortion Federation, and Curtis Bay Medical Waste Facility denied that the incident occurred (in spite of photographs showing the boxes in which the remains were allegedly found covered in the company’s labeling), telling The Daily Wire in a statement that a Curtis Bay employee took three packages from Washington Surgi-Clinic on March 25 that were delivered to Curtis Bay’s incineration facility.

“At no time did the Curtis Bay employee hand over any of these packages to the Progressive Anti-Abortion Uprising or other third party, and any allegations made otherwise are false,” the statement said.

Members of Progressive Anti-Abortion Uprising told The Daily Wire at the time that the box they intercepted at the clinic contained the five preemie-sized aborted babies as well as 110 mostly pulverized babies aborted in the first trimester.

But Curtis Bay insisted that it does not dispose of fetal remains.

“As stated in client agreements and company policy, customers like Washington Surgi-Clinic are prohibited from disposing of fetuses and human remains via Curtis Bay’s services,” the Curtis Bay statement to The Daily Wire said.

“Curtis Bay provides its clients with medical waste bags and boxes to use in a manner that complies with applicable law, client agreements and company policy,” the company continued. “Curtis Bay continues to fully cooperate with law enforcement.”

The company did not immediately respond to late September requests for comment from The Daily Signal.