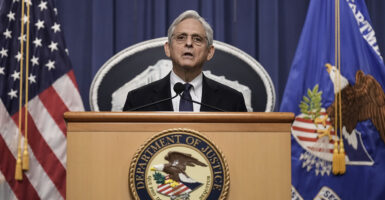 Republican senators condemned Attorney General Merrick Garland for allegedly creating an atmosphere in which the Justice Department would silence dissent on transgender issues. In this photo, Garland delivers a statement at the U.S. Department of Justice Aug. 11, 2022, in Washington, D.C. (Photo: Drew Angerer/Getty Images)

Three national medical organizations sent a letter to the Department of Justice under President Joe Biden, urging the department to “investigate and prosecute” those responsible for an alleged “campaign of disinformation” about controversial transgender medical interventions, which the organizations blamed for an increase in bomb threats to medical facilities.

Republican senators responded with their own letter to DOJ Monday, suggesting that the letter represents an alarming trend of the government “quashing or criminalizing civic discourse.”

The health organizations’ Oct. 4 letter urged DOJ to “investigate the organizations, individuals, and entities coordinating, provoking, and carrying out bomb threats and threats of personal violence against children’s hospitals and physicians across the U.S.”

The letter traced the bomb threats to “an intentional campaign of disinformation, in which a few high-profile users on social media share false and misleading information targeting individual physicians and hospitals, resulting a rapid escalation of threats, harassment, and disruption of care.”

“Our organizations have called on technology companies to do more to prevent this practice on digital platforms, and we now urge your office to take swift action to investigate and prosecute all organizations, individuals, and entities responsible,” the health organizations wrote.

The senators did not support the bomb threats and rather noted that “violence and threats are not protected speech and should be prosecuted to the fullest extent of the law.” Yet they warned that “the issue of how best to treat minors struggling with their gender dysphoria is the subject of ongoing and emotional debate, which Americans have a protected First Amendment right to fully engage in.”

The controversy traces back to reports that Boston Children’s Hospital’s Center for Gender Surgery performs mastectomies on teenagers as young as 15, and since-deleted wording on the hospital’s website claiming that teens as young as 17 can get vaginoplasties.

Chaya Raichik, who runs the popular Libs of TikTok Twitter account, also captured audio suggesting that Children’s National Hospital in Washington, D.C., offers such interventions for teens. Raichik asked an operator at the hospital whether her (hypothetical) 16-year-old daughter could receive a “gender-affirming hysterectomy.” The operator said, “We have all different type[s] of age groups that come in for that” procedure, and added, “I have seen younger kids.”

A Children’s National Hospital spokesperson told The Daily Signal, “We do not provide gender-affirming surgery for anyone under the age of 18.”

Pro-transgender activists have condemned Raichik’s Twitter posts, along with other posts about such controversial transgender interventions performed on children, as a form of “stochastic terrorism,” and the medical organizations’ letter appears to reference these social media posts.

In their letter, the Republican senators noted that the Oct. 4 letter appears to follow a trend. After the school boards association sent a letter last year calling on the Justice Department to target concerned parents, the department issued a memorandum on Oct. 4, 2021, directing the FBI to investigate threats against school boards.

“Your actions in regard to the NSBA letter sent an inappropriate message that federal law enforcement can and will be used to aid one side of a political debate, and to either silence or chill the speech of the other,” the Republicans wrote. “Now, in a remarkably similar fashion, medical associations have written to you asking you to again treat any speech critical of their position on a sensitive matter of public policy as a physical threat warranting a law enforcement response.”

“The weaponization of federal law enforcement agencies like the DOJ, in order to produce preferred policy outcomes, cannot continue — our democracy depends on it,” the senators wrote.

They set a Nov. 1 demand for answers to the questions whether Garland solicited the Oct. 4 letter, whether Garland or a Department of Justice employee had engaged with the health organizations about the letter before it was sent, and whether engaging in an “intentional campaign of disinformation” is a prosecutable offense. A spokesperson for the American Medical Association told The Daily Signal on behalf of all three health organizations that the DOJ did not solicit the letter.

Medical interventions can have dangerous lifelong impacts. Even “treatments” that come short of surgical alterations can have dangerous long-lasting results. So-called puberty blockers, for example, actually introduce a disease into a patient’s body, according to Dr. Michael Laidlaw, an endocrinologist in Rocklin, California. Hypogonadotropic hypogonadism occurs when the brain fails to send the right signal to the gonads to make the hormones necessary for development.

“An endocrinologist might treat a condition where a female’s testosterone levels are going to be outside the normal range,” Laidlaw told PJ Media. “We’ll treat that, and we’re aware of metabolic problems. At the same time, an endocrinologist may be giving high levels of testosterone to a female to ‘transition’ her.” Cross-sex hormones can also have serious long-term side effects, increasing the risk of osteoporosis and cardiovascular events.

Neither the Department of Justice nor the American Academy of Pediatrics nor the Children’s Hospital Association responded to The Daily Signal’s request for comment by publication.

Editor’s Note: This story has been updated to reflect that a spokesperson from the American Medical Association denied suggestions that the DOJ solicited the Oct. 4 letter.