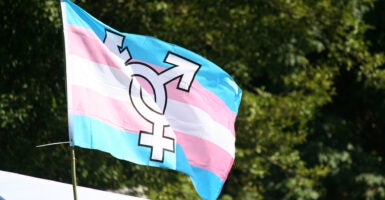 A recorded call with Children’s National Hospital in Washington, D.C., indicates the hospital provides “gender-affirming hysterectomies” for 16-year-olds and younger patients, although the hospital is denying it does.

The call was recorded by Chaya Raichik, who is behind the popular Libs of TikTok Twitter account. In the call to the Children’s National Hospital, Raichik, who says she has a 16-year-old looking to have a gender-affirming hysterectomy, keeps asking if the hospital provides hysterectomies to people the age of her child.

In the call, released Thursday by Libs of TikTok, Raichik asks, “Is [gender-affirming hysterectomy] a common procedure that you guys do for that age?”

The operator responds: “Yes. We have all different type[s] of age groups that come in for that.”

“For the hysterectomy?” Raichik continues.

“Do you know what’s the youngest age you would do it on?”

A Children’s National Hospital spokesperson told The Daily Signal, “We do not provide gender-affirming surgery for anyone under the age of 18. We do not provide hormone therapy to children before puberty begins. Care is individualized for each patient and always involves families making decisions in coordination with a team of highly trained pediatric specialists.”

A hospital spokesperson also said the voices on the call were “hospital operators, not anyone who delivers care to our patients.”

In her coverage on her Substack, Raichik also included archived screenshots of the hospital’s website stating the hospital offers “gender-affirming hysterectomy,” among other procedures, to patients ages 0-21.

The call comes amid a firestorm over videos released by Boston Children’s Hospital about gender transition treatment.

“Children’s National must have seen the negative coverage about Boston Children’s Hospital because they modified their website the day after I took screenshots of it,” wrote Raichik on her site. “‘Gender-affirming hysterectomies’ was no longer listed as a procedure available for minors.”

A webpage for Boston Children’s Hospital indicated that the hospital provides vaginoplasties for 17-year-olds. It appears the webpage was recently changed to increase the age to 18, Fox News reports.

Chris Elston, also known as “Billboard Chris” for his work traveling to cities wearing billboards opposing gender ideology, first drew attention to the Boston Children’s Hospital videos about gender treatment on Twitter. Upon finding them, “I thought, ‘Oh, perfect.’ I can just tweet these out … it’s always better to use their own words because people can’t deny it,” he told The Daily Signal in a phone interview.

One video features Dr. Frances Grimstad describing “gender-affirming hysterectomies,” in which a surgeon removes most or all of a female patient’s reproductive organs for gender-reassignment purposes.

In another video, Dr. Amir Taghinia of Boston Children’s Hospital explained what happens in a phalloplasty procedure for trans-identifying patients.

These videos were removed from the hospital’s public YouTube channel shortly after they went viral.

Following backlash, the hospital released a statement on Aug. 16 denying that it performs gender-affirming hysterectomies on patients under 18.

Elston noted that even if hospitals like Boston Children’s claim to only perform gender-reassigning genital surgeries on those 18 and older, there’s still prep time before these surgeries.

A male-identifying female patient seeking a phalloplasty, for instance, must undergo a “gender-affirming” hysterectomy and hormone treatment before then. “They’re not doing these at the same time,” Elston explained.

Doctors are “preparing for [the phalloplasty] by doing hair removal from the arm, and hair removal has to be done six months to a year in advance,” said Elston.

As Elston said, World Professional Association for Transgender Health recently lowered the age requirements for some gender transition treatments. The Associated Press reported in June that the association now recommends “most genital surgeries … including womb and testicle removal” for 17-year-olds, “a year earlier than previous guidance.”

Adolescents and teens seeking gender-reassignment treatment have often suffered trauma or abuse, Elston explained. “These are kids trying to escape trouble, and they’re sucked into this ideology.”

“[They] have one consultation,” he continued. “They come to Boston Children’s Hospital, they’ll meet with the social worker, they’ll meet the nurse, the doctor who explained what’s going to happen and that’s it. The next appointment is the surgery.”