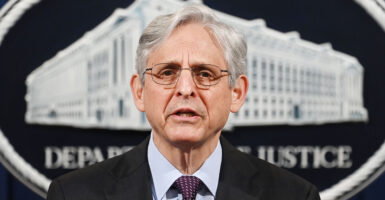 On Wednesday, the Justice Department charged 11 more pro-life activists with violations of the Freedom of Access to Clinic Entrances Act for blocking the entrance of an abortion clinic in 2021. Pictured: Attorney General Merrick Garland delivers a statement at the Department of Justice on April 26, 2021. (Photo: Mandel Ngan-Pool/Getty Images)

Conservatives are condemning the Department of Justice’s targeting of pro-life activists, accusing the Justice Department of ignoring scores of attacks on pro-lifers.

President Joe Biden’s Justice Department recently arrested Catholic father and pro-life activist Mark Houck, who allegedly pushed a pro-abortion activist for allegedly harassing his son. On Wednesday, the Justice Department charged 11 more pro-life activists with violations of the Freedom of Access to Clinic Entrances Act for blocking the entrance of an abortion clinic in 2021.

“Something truly evil is happening at the DOJ,” tweeted digital strategist Greg Price in a now viral tweet. “They are charging 11 pro-life activists for blocking the entrance to abortion clinics, carrying up to 11 years in prison and $250,000 fines. A total of 0 people have been charged by the DOJ for firebombing pro-life pregnancy centers.”

“Peaceful protests at abortion clinics get you federal charges from the DOJ,” he continued. “Acts of terrorism against pregnancy centers are totally fine.”

At least 83 Catholic churches and 73 pregnancy resource centers or pro-life organizations have been attacked since the draft opinion was leaked in May.

Some of these pro-life centers and organizations told The Daily Signal that they have not heard anything from federal authorities—though the FBI said it is investigating “a series of attacks and threats targeting pregnancy resource centers, faith-based organizations, and reproductive health clinics across the country, as well as to judicial buildings, including the U.S. Supreme Court.”

But the FBI would not share any updates on this investigation with The Daily Signal and would not say whether it has made any arrests related to these incidents. The Daily Signal highlighted these findings in a Thursday report, prompting Republican strategist Matt Whitlock to point out the “striking juxtaposition” between the FBI’s behavior.

“On one hand the FBI and DOJ are taking victory laps for arresting peaceful pro-lifers,” he tweeted. “On the other hand, they’re ignoring firebombing and vandalism of pro-life crisis pregnancy centers (which have become a favorite target of liberals like [Massachusetts Sen.] Liz Warren).”

In a Thursday statement, Susan B. Anthony Pro-Life America condemned the Biden administration for targeting pro-lifers.

“We have seen enough of the Biden-Harris administration’s egregious abuse of the Justice Department. Pro-abortion Democrats will stop at nothing to protect the abortion industry that spends millions to elect them, while demonizing pro-life advocates working to save lives and turning a blind eye to violence against them,” Susan B. Anthony Pro-Life America President Marjorie Dannenfelser said.

“Pregnancy centers have been firebombed, an elderly canvasser peacefully exercising her First Amendment rights was shot in the back, and the pro-life movement’s calls for equal justice under the law have been ignored. Still the FBI refuses to conduct a transparent investigation and state whether any arrests have been made in scores of attacks since the leak of the Dobbs decision. It is clear the administration has put a target on anyone who dares tell the truth that abortion takes the life of an innocent child.”

Heritage Action accused the FBI of hunting “down pro-lifers like they are going after Bin Laden,” noting that “when it comes to radical leftists who commit acts of violence and vandalism against pregnancy help centers and churches,” there is “silence and inaction” from the Justice Department. (The Daily Signal is the news outlet of The Heritage Foundation, the sister organization of Heritage Action.)

The March for Life condemned news that the FBI would not share with The Daily Signal whether it has made any arrests in its stated investigation into the attacks on pro-life centers and organizations.

“What’s going on at DOJ and FBI appears to be a very far cry from equal justice under the law,” the organization said.

“What’s it going to take for McCarthy and McConnell to say enough is enough and publicly vow to begin the impeachment process against Garland on Day 1?” he asked. “At this rate, there won’t be any conservatives left outside of Guantanamo to send fundraising emails to after your hearings.”

“We have serious concerns that the work of DOJ is being inappropriately politicized, as investigations into these acts of violence against organizations disfavored by the current administration are being slow-walked or outright ignored,” the organizations said in the request. “The execution of justice requires fair and equal treatment under the law here, regardless of the Biden administration’s sympathies.”

The Freedom of Information Act request notes that pro-life organizations have been “threatened, their buildings vandalized, defaced, and even firebombed” as “extremist groups” continue to call for violence and “gleefully” take credit for “these wicked actions.” The letter specifically flags Nicholas Roske, who traveled across the country with the stated attempt to kill Supreme Court Justice Brett Kavanaugh.

“This continued assault against pro-life Americans, pro-life institutions, and even the Supreme Court of the United States is a manifest injustice that requires a prompt, comprehensive, and public response,” the letter notes.