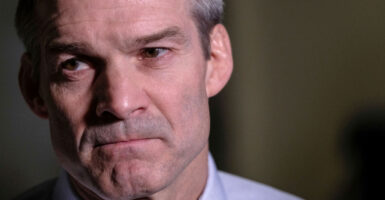 "Several recent actions by the Department reinforce the conclusion that the Justice Department is using its federal law enforcement authority as a weapon against the administration’s political opponents," write Reps. Mike Johnson and Jim Jordan. Pictured: Jordan at a closed session before the House Intelligence, Foreign Affairs and Oversight committees Oct. 23, 2019. (Photo: Alex Wroblewski/Getty Images)

Republicans Reps. Jim Jordan of Ohio and Mike Johnson of Louisiana are launching a congressional inquiry into the Justice Department’s political enforcement of the Freedom of Access to Clinic Entrances (FACE) Act, The Daily Signal has learned.

“Several recent actions by the Department reinforce the conclusion that the Justice Department is using its federal law enforcement authority as a weapon against the administration’s political opponents,” the Republican congressmen said in a letter to both Jacqueline Romero, the U.S. attorney for the Eastern District of Pennsylvania, and Attorney General Merrick Garland. “Since the unprecedented leak of a draft Supreme Court opinion in Dobbs v. Jackson Women’s Health Organization, the Justice Department has politicized enforcement of the Freedom of Access to Clinic Entrances (FACE) Act.”

They continued: “We write to conduct oversight of your authorization of a dawn raid of the home of a pro-life leader, in front of his wife and seven children, when he had offered to voluntarily cooperate with authorities.”

In the letter, first obtained by The Daily Signal, Jordan and Johnson reference the FBI’s raid on the home of Mark Houck, a Catholic father arrested for allegedly pushing a pro-abortion activist who allegedly harassed his son.

“The Department’s decision to arrest Houck, as well as the tactics used to effectuate the arrest, are troubling,” the letter said, noting that Houck’s wife recounted how FBI “had about five guns pointed at my husband, myself and basically at my kids,” and emphasizing that Houck’s attorney “subsequently disclosed that the dawn raid was unnecessary because Houck had offered to appear voluntarily and the FBI targeted Houck ‘solely to intimidate people of faith and pro-life Americans.’”

“The Department has almost exclusively enforced the FACE Act to protect pro-abortion activists while failing to prosecute harassment and intimidation of pro-life supporters,” Jordan and Johnson wrote.

The Justice Department’s treatment of Houck “stands in stark contrast to its treatment” of the attacks on pro-life facilities, the letter said.

At least 83 Catholic churches and 73 pregnancy resource centers or pro-life organizations have been attacked, vandalized, firebombed, or burnt to the ground since the draft Dobbs opinion was leaked in May, according to Catholic Vote trackers. The Republicans note that Garland released no press release regarding an investigation or charges into the attack on HOPE Pregnancy Center, a pro-life pregnancy center in his judicial district.

They also pointed to the attack on an 84-year-old pro-life Michigan volunteer, who was shot by a Michigan man while canvassing on a pro-abortion ballot proposal.

“There has been no outcry or press conference from the Justice Department in response to this crime,” Jordan and Johnson pointed out.

“While the FBI says that it is investigating a ‘series of attacks and threats targeting pregnancy resource centers, faith-based organizations, and reproductive health clinics,’ to our knowledge, the Department and FBI have not executed any SWAT team dawn raids to make arrests of anti-life activists,” they added.

The Republicans said that the Justice Department’s “lackluster response” to attacks on pro-life facilities shows that the “Biden administration would rather cater to the radical anti-life movement than help facilities that protect pregnant women in need,” demanding documents and communications on FACE Act enforcements, the Department’s Reproductive Rights Task Force, attacks on pregnancy resource centers, and Mark Houck by Oct. 20, 2022.

The FBI said this week to The Daily Signal that it is investigating “a series of attacks and threats targeting pregnancy resource centers, faith-based organizations, and reproductive health clinics across the country, as well as to judicial buildings, including the U.S. Supreme Court.”

“The incidents are being investigated as potential acts of domestic violent extremism, FACE Act violations, or violent crime matters, depending on the facts of each case,” the statement said. “The FBI takes all violence and threats of violence very seriously and we are working closely with our law enforcement partners at the national, state, and local levels to investigate these incidents.”

When The Daily Signal pressed the FBI for more information this week, referencing the recent arrest of Houck, national press officer Christina Pullen repeatedly said the FBI does “not have any information to add” to its old statement. She also would not say whether the FBI has made any arrests related to these attacks and threats.

The FBI would not address these questions. And on Wednesday, the Justice Department charged 11 more pro-life activists with violations of the Freedom of Access to Clinic Entrances Act for blocking the entrance of an abortion clinic in 2021.