Mark Houck Attorney: Garland Must Explain to Family Why Their Father Was Arrested by Men With Guns 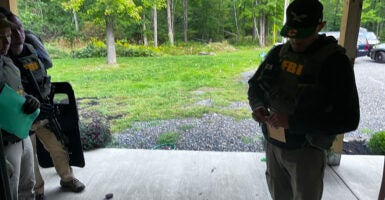 When Republicans question Attorney General Merrick Garland on the shocking arrest of a Catholic father, Mark Houck’s lawyer wants the Houck family to be in the front row.

Peter Breen, an attorney with the Thomas More Society representing Houck, told The Daily Signal in a phone interview that the Justice Department sent “20-plus heavily armed federal agents with shields and long guns” to arrest Houck in late September “to intimidate pro-life people and people of faith.”

“Based on what we understand, a local U.S. attorney’s office would not have approved a raid of that size for an alleged crime, which doesn’t involve guns, drugs, the Mafia. And so that raid would have been approved at a high level within the Department of Justice in Washington. And we don’t know if the attorney general himself approved the raid, but presumably one of his top aides did.”

Breen praised the members of Congress who have written letters calling for answers from the Justice Department and from Garland. He particularly emphasized Republican Iowa Sen. Chuck Grassley’s letter for its “pointed questions for the attorney general.”

“If I were the attorney general, I would not want to answer those questions,” he added.

Grassley’s letter asks why the Justice Department waited 11 months after the October 2021 incident (in which Houck allegedly pushed a pro-abortion activist who was allegedly antagonizing his son) to arrest Houck. The senator also asks for a list of Justice Department and FBI officials who approved the decision to open a grand jury investigation into Houck after the dismissal of the state criminal complaint.

“Please explain how the execution of the search warrant complied with Attorney General Garland’s use of force memorandum,” Grassley added.

Breen believes the Justice Department’s actions were “clearly intended to chill pro-life activity outside of abortion clinics.” The attorney said that he is getting calls from pro-life sidewalk counselors who are wondering whether they are going to be targeted for their work at abortion clinics, where they pray and offer support or pro-life literature to those entering abortion clinics.

“I would love it when they bring Merrick Garland in front of them to answer questions about this raid and the decision to prosecute a peaceful man like Mark Houck, I would love it if they would invite the Houck family so that the attorney general can personally apologize to them for what the federal government has done to this family of nine, seven little kids who had to watch their father, their hero, get taken away by men with guns covering their front lawn, 15-plus vehicles, 20-plus law enforcement personnel.”

“We’ve never seen this before,” he added.