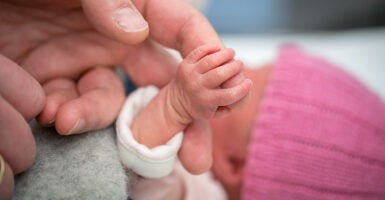 On Thursday, Indiana’s abortion ban went into effect, prohibiting abortion except in cases of rape or incest, or to save the life or health of the mother. (Photo: Morten Falch Sortland/Getty Images)

On Thursday, Indiana’s abortion ban went into effect, prohibiting abortion except in cases of rape or incest, or to save the life or health of the mother.

“Hoosiers have been committed to protecting unborn children and mothers from abortion,” Sue Liebel, director of Susan B. Anthony List Pro-Life America, said in a statement.

“Now, in the Dobbs era, elected officials listening to the voices of Hoosiers from across the state finally are able to modernize their laws to recognize the humanity of the unborn child,” Liebel said. “We’re grateful Governor [Eric] Holcomb and Indiana legislators listened to the voices of Hoosiers and protected unborn children and their mothers.”

Abortions can now only be performed in hospitals in Indiana or ambulatory surgical centers that are owned by a hospital. Doctors who perform illegal abortions could face felony charges and be sentenced to up to six years in prison and fined up to $10,000.

“While today is devastating, it is not the end,” Alexis McGill Johnson, the president of Planned Parenthood Action Fund, wrote on Twitter after Indiana’s pro-life law took effect.

“We will have the final word. We will continue fighting this ban until every single person in Indiana can get the abortion care that they need and deserve,” Johnson said.

Next door in Ohio, a judge has blocked that state’s pro-life law from taking effect for 14 days. The legislation would prohibit abortion after a fetal heartbeat is detected. Republican Gov. Mike DeWine signed the bill into law in 2019, but it did not take effect until Roe was overturned.

In his ruling, Jenkins wrote: “No great stretch is required to find that Ohio law recognizes a fundamental right to privacy, procreation, bodily integrity, and freedom of choice in health care decision-making.”

The ACLU and the other pro-abortion groups said in a joint statement that they are “grateful that, for now, Ohioans can once again widely access abortion care in their own state.” The organizations vowed that they “remain intensely committed” to protecting abortion access in Ohio.

Pro-life advocates spoke out against the ruling, arguing it runs contrary to the will of Ohioans.

“Shame on Judge Jenkins for siding with the abortion industry against the voices of Ohioans and their elected representatives,” said Susan B. Anthony List’s Liebel.

Ingrid Skop, an OB-GYN and scholar at the pro-life Charlotte Lozier Institute, said in a statement that it’s clear to her that, contrary to the assertions of pro-abortion groups, “the laws in Ohio and in every other state with pro-life protections are not stopping doctors from giving necessary medical care to mothers.”

The people of Ohio and Indiana “stand with unborn children and their mothers,” Liebel said. “We look forward to the day when courts respect the democratic process and the clear will of Americans who want to protect life in our laws.”