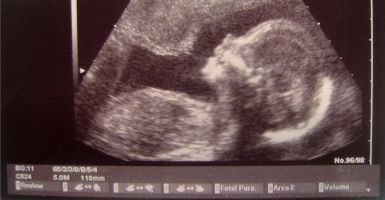 A bill has been introduced in the Ohio legislature that would prohibit abortion based on a fetal diagnosis of Down syndrome.

House Bill 135, titled “The Down Syndrome Non-Discrimination Act,” would prohibit abortion because of “a prenatal diagnosis of Down syndrome in an unborn child.”

The legislation was introduced by Reps. Sarah LaTourette, R-Bainbridge, and David Hall, R-Millersburg.

Ohio Right to Life has lobbied for the bill and included it in its legislative agenda for 2015.

“The right to life is one that belongs to every American,” Katie Franklin, the director of communications for Ohio Right to Life, told The Daily Signal. “We want to protect the most vulnerable among us.”

Franklin said she hopes the bill will help “educate and spread awareness” about Down syndrome.

“People with Down syndrome face extraordinary discrimination,” said Franklin. “But I think there’s a move in society to do what we can to embrace these people as normal people who just happen to have an extra chromosome.”

Franklin and LaTourette both lamented how many of these lives are lost to abortion.

“Sadly, many women turn to abortion when they discover their unborn child might have Down syndrome,” LaTourrette said in a statement. “Having worked in the adoption field, I know firsthand that there are plenty of alternatives to abortion that respect the value of life. I am proud to introduce legislation that will end this horrific form of discrimination. This is a small step in ensuring the right to life, liberty and the pursuit of happiness for all individuals—not just the ‘perfect’ or the born.”

Kellie Copeland, the executive director of NARAL Pro-Choice Ohio, told the Cleveland Plain Dealer that the law would impede the relationship between a woman and her doctor.

“Medical decisions have to be made in these cases by women and their physicians,” said Copeland. “The idea that any piece of legislation could take into account all the factors in a medical diagnosis is absurd.”

According to the Charlotte Lozier Institute, a pro-life research organization, several studies show that the abortion rate for pregnancies with a Down syndrome diagnosis can range from 61 percent to 93 percent, depending on factors such as income level and religious beliefs.

About 6,000 babies with Down syndrome are born each year in the United States.

North Dakota is the only state that bans abortion based on genetic abnormalities such as Down syndrome. North Dakota also prohibits abortions based on the gender of the child.