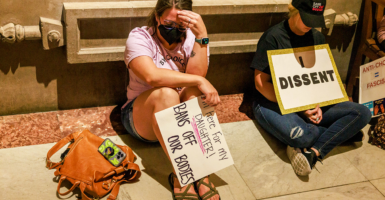 “I think the big lesson for the abortion fight is that this has to get solved politically,” Terry Schilling, the president of the American Principles Project, says. (Photo: Jeremy Hogan/SOPA Images/LightRocket via Getty Images)

“I think the big lesson for the abortion fight is that this has to get solved politically,” Terry Schilling, the president of the American Principles Project, told The Daily Signal.

Senate Bill 1, or SB 1, was signed into law by Gov. Eric Holcomb, a Republican, on Aug. 5. The new law, which goes into effect on Sept. 15, will replace state’s current 22-week abortion ban.

SB 1 will ban abortions in the state, except in cases of rape or incest, up until 10 weeks, WYFI Indianapolis reported. If the mother’s life is at risk or if there are fatal fetal anomalies, abortions are allowed up to 20 weeks post-fertilization, according to CNN.

“It has to get solved by running on these policies in your elections, getting elected, and then holding elected officials accountable and getting them to pass legislation. You can’t do it any other way,” Schilling said.

The Indiana House vote of 62-38 to pass the bill was mostly down partisan lines, though, nine House Republicans voted against Senate Bill 1, Indianapolis Star reported. All House Democrats voted against the bill.

Eight Senate Republicans and all 11 Senate Democrats voted against the bill, which was drafted by state Sen. Susan Glick, and cosponsored by state Reps. Wendy McNamara and Joanna King. Republicans hold a majority in both the state House and the state Senate, with 71 members and 39 members, respectively.

The Hoosier State also overwhelmingly voted for former President Donald Trump in the 2020 election. Trump received 57% of the vote whereas President Joe Biden received 41% of the vote.

Sue Liebel, state policy director for Susan B. Anthony Pro-Life America, or SBA Pro-Life America, said that after the June 24 overturning of Roe v. Wade, returning the issue to voters, abortion was changed “as we know it,” specifically by the medical community.

“What the final law says is that, if there are these abortions, they’ll be done in hospitals, and it’s going to close down all the clinics,” says Liebel.

Planned Parenthood plans to keep its 11 Indiana facilities open, despite not being able to offer abortions, according to the Indianapolis Star. In South Bend, Indiana, the Whole Women’s Health clinic, one of seven abortion clinics in the state, will close after the law goes into effect, reports the South Bend Tribune, which also reported that 98% of Indiana abortions were done by 7 clinics.

Catherine Gunsalus, the state advocacy director of Heritage Action for America, the grassroots arm of The Heritage Foundation, said the passage of the bill was enabled by the Supreme Court’s decision in Dobbs v. Jackson Women’s Health Organization, which was the high court ruling that overturned the 1973 Roe decision.  (The Daily Signal is the news outlet of The Heritage Foundation.)

“The Dobbs decision finally allowed elected representatives of the American people in the states the ability to decide what protections should be in place for the unborn. In a swift response to the [Supreme Court] decision, Indiana legislators passed and Gov. Holcomb signed SB 1 and SB 2, protecting both unborn children and women from the tragedy of abortion,” Gunsalus told The Daily Signal.

“Indiana has joined over a dozen states that have acted to protect life—and support women and their babies—in a post-Roe world,” said Melanie Israel, a policy expert on life, religion, and family at The Heritage Foundation.

Other states, including Texas, Oklahoma, and South Dakota have banned abortion through trigger laws that went into effect following the Dobbs decision. However, Indiana did not have a trigger law and has become the first state to pass new legislation to enact such a ban.

Democrats accused Republicans of putting the lives of women and girls in harm’s way while labeling the new law the “worst form of government overreach.”

“The Indiana Republican Party has now made it against the law for Hoosiers to have a safe and legal abortion, and it’s without a doubt Senate Bill 1 will endanger women and little girls’ lives across the state,” Indiana Democratic Party Vice Chair Myla Eldridge said in a statement.

“Right now, abortion is still safe and legal in Indiana until Sept. 15 when this bill is set to become law,” Gibron said during an interview with Lakeshore Public Radio. “We are currently exploring every legal option available to stop this devastating outcome because the reality is that this will impact half of the state of Indiana.”

“Extreme lawmakers here are creating a public health crisis. There are over 1.5 million people in Indiana who this law will impact if and when they need access to abortion care,” she said.

Similarly, Eli Lilly, one of the largest employers in the state, expressed concern over how the new law will impact the company’s hiring process.

“We are concerned that this law will hinder Lilly’s—and Indiana’s – ability to attract diverse scientific, engineering and business talent from around the world,” the company said in a statement, Bloomberg reported “Given this new law, we will be forced to plan for more employment growth outside our home state.”

Hearings and debates are underway in South Carolina for a bill that would ban abortion unless a mother’s life is at risk, though some Republicans are hesitating with the bill, CBS reported.

“It’s like you are playing with live ammunition right now. What you are deciding is going to have immediate effect on a lot of South Carolinians,” Rep. Tom Davis, R-S.C., said. Last year, South Carolina passed a bill banning abortion after cardiac activity is detected, which Davis supported.

Kansas voters rejected a pro-life amendment earlier this month that said the state’s constitution does not include a right to abortion.