California Students Are Fighting to Keep Abortion Pills Off Their Campus 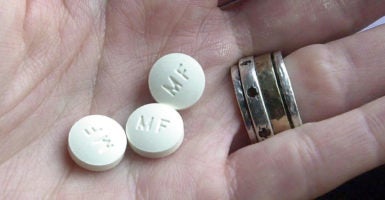 “These pills will hurt our daughters and end the lives of our grandchildren," Californians for Life says. (Photo: Bill Greenblatt UPI Photo Service/Newscom)

San Jose State University students are protesting a measure that may bring abortion pills to their campus after the California Senate approved a bill requiring the state’s public universities and colleges to offer abortion drugs at their health centers.

“I just can’t imagine it honestly,” Spartans for Life Vice President Miriana Miranda said, according to CBS San Francisco. She added that she feels horrible thinking about her peers who could have terribly painful and dangerous abortive procedures alone in their dorms if the bill passes the governor’s desk.

“It will basically be a recipe for disaster,” Spartans for Life leader Ricky Silva said. “Some [women] have even died as a result of taking the abortion pill,” said Silva. “Now imagine a woman taking the pill at her dorm room.”

Senate Bill 320, sponsored by Democratic state Sen. Connie Leyva, requires the state’s community colleges and public universities to provide women with abortion pills for up to 10 weeks of pregnancy so that they don’t have to travel to get the pills.

The bill is critical, Leyva told ABC News, because women in college should have the same access to reproductive health care as other women. “Women do not lose the constitutional right to end a pregnancy simply because they are a college student,” Leyva said. She claims the bill is a necessity so that young collegiate women don’t have to foot the cost of abortions themselves or travel long distances to have abortions.

Pro-lifers are also displeased that the already taxpayer-funded colleges would require citizens against abortion to fund those procedures at the state’s public higher education institutions.

Advocacy group Californians for Life also expressed displeasure over the proposed measure. “These pills will hurt our daughters and end the lives of our grandchildren by forcefully inducing a miscarriage up to 10 weeks of pregnancy, with hemorrhaging and delivery of the baby into the dorm room toilet,” the group said in a statement.

Other students think the bill would provide a great resource for California college women. “We should decide what we want to do with our body,” said Celina Arranaga, a San Jose State University student who thinks the proposed measure constitutes a great positive for California universities. “It’s our body … we should dictate what happens to us.”