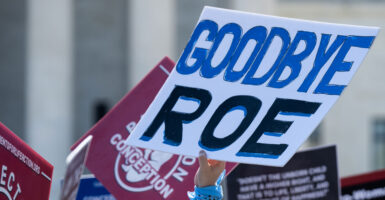 Pro-life activists protest June 13 outside the Supreme Court, 11 days before the court handed down its decision to overturn Roe v. Wade, the 1973 ruling that legalized abortion across the nation. (Photo: Bill Clark/CQ-Roll Call, Inc/Getty Images)

The Supreme Court overturned its Roe v. Wade ruling Friday with a 5-4 decision in a Mississippi case that returns the issue of abortion to the American people and their elected lawmakers after nearly 50 years.

The high court’s dramatic and historic ruling in Dobbs v. Jackson Women’s Health Organization was not a surprise to either side of the abortion debate, since a draft majority opinion written by Justice Samuel Alito was leaked to Politico in early May.

“This is a great day in American history, especially for the millions of children whose innocent lives will be spared from the horrors of abortion in the years to come,” Heritage Foundation President Kevin Roberts said in a written statement. (The Daily Signal is Heritage’s multimedia news organization.)

For too long, Roe v. Wade has poisoned our courts, our culture, and our laws. Today’s decision corrects the grave constitutional error of Roe v. Wade—and finally gives the American people, through their elected representatives, the power to fix America’s extreme abortion laws and enshrine protections for the unborn in law.

The May 2 leak of Alito’s draft opinion from February prompted rowdy protests outside the homes of some Supreme Court justices, as well as what police said was a California man’s failed assassination attempt on Justice Brett Kavanaugh. Conservatives condemned local and federal prosecutors for failing to enforce laws against intimidation of federal judges.

The Supreme Court’s 1973 ruling in Roe v. Wade legalized abortion on demand across the nation, replacing restrictions that previously were determined state by state.

But the high court holds in Dobbs that the Constitution doesn’t confer a right to abortion, overrules both Roe v. Wade and the related case of Planned Parenthood of Southeastern Pennsylvania v. Casey, and returns the authority to regulate abortion to Americans through their elected representatives.

“Roe was egregiously wrong from the start,” Alito writes in the majority opinion, adding:

Its reasoning was exceptionally weak, and the decision has had damaging consequences. And far from bringing about a national settlement of the abortion issue, Roe and Casey have enflamed debate and deepened division. It is time to heed the Constitution and return the issue of abortion to the people’s elected representatives.

The high court heard arguments in December in Dobbs, a case centered on a Mississippi law prohibiting a woman from getting an abortion after 15 weeks of pregnancy. The state’s abortion law largely is in line with those of most Western European countries.

In his opinion, Alito writes:

Roe was on a collision course with the Constitution from the day it was decided, Casey perpetuated its errors, and those errors do not concern some arcane corner of the law of little importance to the American people. Rather, wielding nothing but ‘raw judicial power,’ … the court usurped the power to address a question of profound moral and social importance that the Constitution unequivocally leaves for the people.

Roberts, however, disagreed that upholding the Mississippi abortion law required overturning Roe, so the vote to do that was 5-4, not 6-3.

Filing a dissenting opinion were Justices Elena Kagan, Sonia Sotomayor, and Stephen Breyer, who is retiring after this term.

The high court’s decision doesn’t mean a national ban on abortion, as many pro-abortion activists have suggested. Some states, including New York and California, have laws that allow late-term abortions.

>>> Related: See What Happens to Abortion State by State With Overturning of Roe v. Wade

However, about half the states have abortion restrictions on the books, while about 20 passed laws expanding abortion in recent years.

“The injustice of Roe has finally come to an end, and the momentum to protect life in law is finally on the side of innocent preborn children and their mothers who deserve our help,” Students for Life President Kristan Hawkins said in a written statement.

“Roe v. Wade has been a cancer growing in our Constitution resulting in more than 63 million deaths,” Hawkins said. “Today, the court has cut it out, and that’s a win. Now we get back to building up a health society, affirming life for women and their children, born and preborn.”

This victory for life is but the first step in our fight for the unborn. State and federal lawmakers will once again be free to advance protections for life. American public opinion has advanced with science –mothers have been able to see ultrasounds and hear their baby’s heartbeat at six weeks. Recognizing that, over the past 50 years Americans have steadily become more passionate about protecting life, and the 26 states with protections for life already in place reflect the desire of the American people to defend unborn babies.

Now, other states must follow the lead of governors in South Dakota, South Carolina, Florida, and Nebraska in calling for special sessions and new legislative initiatives to protect life, and our federal representatives should join the states in enacting new protections for life.

In a joint statement Friday morning, Planned Parenthood Federation of America, NARAL Pro-Choice America, and a coalition called the Liberate Abortion Campaign rejected any threats of violence over the Supreme Court’s official decision in Dobbs.

“We reject the tactics and threats of groups that use destruction and violence as a means to an end,” Planned Parenthood and the other pro-abortion groups said. “They do not speak for us, our supporters, our communities, or our movement. We are committed to protecting and expanding access to abortion and reproductive freedoms through peaceful, non-violent organizing and activism.”

The Washington Stand reported that six days after the FBI announced a formal investigation into a series of attacks against churches, pregnancy resource centers, and other pro-life organizations, the agency seems to be following through but apparently has made no arrests.

This article was corrected to reflect that the Supreme Court vote overturning Roe v. Wade was 5-4, and updated to reflect the sort of lawmakers who now will be involved in abortion laws.