How State ‘Birthday Abortions’ Bills Stack Up to Federal Restrictions 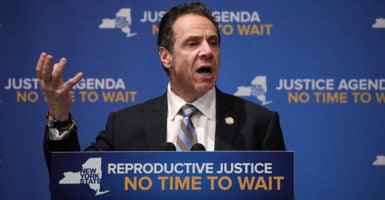 Legislatures in liberal states are advancing bills similar to a New York law allowing mothers to abort their babies up to the time of birth.

New York so far is the only state to pass legislation allowing abortion up to the time of birth, but bills to do the same are moving forward in Illinois, Rhode Island, and Vermont.

Vermont lawmakers seek to codify abortion in the state Constitution.

Rhode Island actually noted the federal ban on partial-birth abortion in a bill expanding abortion rights that passed the state House of Representatives.

“So, New York or any other state doesn’t have to repeat the ban on partial-birth abortion because that’s already banned,” Ruse said.

In 2002, President George W. Bush signed into law the Born-Alive Infants Protection Act, passed with a large bipartisan majority in Congress. That measure determined that a baby who survives a botched abortion is a human being and must be cared for accordingly by medical professionals.

That law carries no punishment for violations, however, and Congress currently is debating putting teeth into it.

In 2003, Bush signed into law the ban on partial-birth abortion, a specific late-term procedure in which a baby is delivered partially before being terminated. This law also had bipartisan backing in Congress, and the Supreme Court upheld it in 2007.

In 2004, Bush signed the Unborn Victims of Violence Act, recognizing as a criminal offense the killing of an unborn baby in the commission of violence against the mother. Although it wasn’t about abortion, the measure provided legal protection to unborn babies.

Nine states and the District of Columbia do not have statutes limiting abortion at any stage of pregnancy, according to the Kaiser Family Foundation. The states are Arkansas, Arizona, Colorado, New Hampshire, New Jersey, New Mexico, Oregon, Vermont, and Idaho.

More permissive state laws could create the likelihood that abortion providers would violate federal laws in those states, said Walter Weber, senior counsel for the American Center for Law and Justice, a conservative legal group.

“States passing these laws do send a clear signal,” Weber told The Daily Signal. “Just like when the Obama administration’s Justice Department decided not to go after marijuana, it sent a message without a legal change.”

It’s at the state level where 99.9% of laws are enforced. If the state says it’s not looking into this, the only fear [for an abortion provider] is that someone would report them and the feds would get involved. It bolsters the belief they can do procedures prohibited by state law with greater impunity.

There is good reason to believe flagging potential attacks on human rights in certain states is a great argument for an enhanced federal role.

That enhanced federal role could be similar to the Civil Rights Division of the Justice Department, created to enforce equal protection under the law, as prescribed by the 14th Amendment, when it was clear certain states either were not protecting those rights or actively violating them, Weber said.

Still, while the public might view recent hard-line abortion proposals as extreme, Ruse said, this is essentially what is protected under the Supreme Court’s Roe v. Wade ruling.

“I’m glad people are outraged about the extreme laws, but, they aren’t legally extreme under Roe v. Wade and Doe v. Bolton,” Ruse said. “Both Supreme Court decisions allow for abortion in all nine months of pregnancy. … I would love to harness all that negative outrage at the New York law and target it at Roe.”

The high court’s Roe v. Wade ruling in 1973 took the issue out of state control by making abortion legal across the United States.

“If Roe v. Wade is overturned, New York could still allow for birthday abortions to be legal,” Ruse said.

In Illinois, which Gov. J.B. Pritzker, a Democrat, promised would be “the most progressive state in the nation for access to reproductive health care,” the Legislature has rolled out two bills considered likely to pass.

One, the Reproductive Health Care Act, would allow abortion until the time of birth and also require that all insurance plans cover abortion. The other bill would eliminate parental notification for minors who get abortions.

A committee in the Vermont state Senate approved a state constitutional amendment codifying the right to an abortion at any stage of pregnancy. The amendment would clarify that an unborn baby “shall not have independent rights under law.”

The Rhode Island House of Representatives passed a bill to codify abortion rights in state law, rather than rely on Roe v. Wade. But the new bill includes language affirming the federal ban on partial birth abortion. A slim majority in the Senate Judiciary Committee appears to favor the bill.

On the federal level, House Republicans are trying to force a floor vote on the Born-Alive Abortion Survivors Protection Act. That legislation would require medical professionals to give the same care to a baby who survives an abortion as they would to any other baby of the same age, as well as to take the baby to a hospital.

Pro-life legislation at the state level has been more common, the abortion rights lobby notes. A total of 28 state legislatures have considered abortion restrictions during 2019 legislative sessions, according to the Guttmacher Institute, an abortion rights group.

Pro-life legislation has had more success over the decades, said Melanie Israel, a research associate with The Heritage Foundation’s DeVos Center for Religion and Civil Society.

“Radical pro-abortion groups have seen the great success that pro-life legislators have had advancing life-affirming policies in the states in recent years, and have responded in kind with New York-style bills that are radically out of step with the American public,” Israel told The Daily Signal.

“It is worth noting that while such radical proposals are, unfortunately, advancing in some states, abortion advocates admit that efforts to expand abortion have been overall ‘overshadowed’ by life-affirming policy proposals in legislatures across the country,” Israel said.

Democrat lawmakers in Virginia attempted to pass a measure similar to the New York bill, allowing abortion up to the point of birth, but it died in committee.

“If a mother is in labor, I can tell you exactly what would happen,” Northam said in an interview on WTOP-FM.

“Northam, in an unguarded and candid moment, was telling the truth,” she said. “This is what clinics would do and what they would get away with.”