George Washington Deserves His Own Day, Not Presidents Day 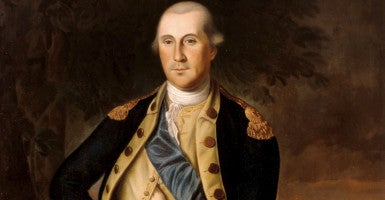 George Washington understood himself to be the president of a republic in which the people, through their elected representatives in Congress, make laws—not some visionary leader who must define what progress requires and lead the unenlightened masses there. (Photo: World History Archive/Newscom)

Poor George Washington. His birthday, spontaneously celebrated since the revolution and formally declared a holiday in 1879, has slowly morphed into the insipid Presidents Day you’ll hear about Monday.

Washington, the “indispensable man” of the revolution who was rightly extolled for being “first in war, first in peace, and first in the hearts of his countrymen,” has now been lumped together with the likes of James Buchanan, Jimmy Carter, Franklin Pierce and John Tyler.

It gets worse. Washington’s good name and great legacy are now shamelessly invoked to justify positions that he would never have envisaged.

In a Time Magazine special edition on Washington, historian Joseph Ellis matter-of-factly remarks: “He began the political tradition that produced a Union victory in the Civil War, the Federal Reserve Board, Social Security, Medicare and, more recently, Obamacare.”

Washington, who called on Americans to display “pious gratitude” for their Constitution and warned against any “change by usurpation,” is now a partisan of the sprawling welfare state and the unprecedented individual mandate.

Ellis even has the gall to hail Washington—the man who gracefully and voluntarily relinquished power after two terms when he could have stayed on for life—as the father of “strong executive leadership” and the precursor to Franklin Delano Roosevelt, who stayed in office for an unprecedented 12 years.

The true Washington still has much to teach us, in particular when it comes to the presidency, foreign policy and religious liberty. Although much has changed in the past two centuries, his sage advice and conduct in office have lost none of their relevance, anchored as they are in the timeless principles of the founding and a sober assessment of human nature.

Washington, like every president after him, swore the following oath upon taking office:

Unlike many presidents in the past 100 years, however, Washington took the oath seriously and did not try to place himself above the Constitution.

He understood himself to be the president of a republic in which the people, through their elected representatives in Congress, make laws—not some visionary leader who must define what progress requires and lead the unenlightened masses there.

Washington took care “that the laws be faithfully executed,” as when he quashed the Whiskey Rebellion in 1794. He did not try to make the laws himself, either by issuing executive orders that circumvented Congress or by regulating what could not be legislated. He left behind no “signature” legislative accomplishments as we would say today. He only used his veto twice—once on constitutional grounds and once in his capacity as commander in chief.

Washington gave, on average, only three public speeches a year while in office—including the shortest ever inaugural address. And, of course, he had to be persuaded to serve a second term.

As a president who took his bearings from the Constitution, Washington devoted considerable attention to foreign policy. Our first president sought to establish an energetic and independent foreign policy. He believed America needed a strong military so that it could “choose peace or war, as our interest guided by justice shall Counsel.” His Farewell Address remains the preeminent statement of purpose for American foreign policy.

No survey of Washington’s legacy would be complete without acknowledging his profound commitment to religious liberty. Many today seem to have lost sight of the crucial distinction he drew between mere toleration and true religious liberty. As he explained in the memorable letter to the Hebrew Congregation in Newport:

All possess alike liberty of conscience and immunities of citizenship. It is now no more that toleration is spoken of, as if it was by the indulgence of one class of people, that another enjoyed the exercise of their inherent natural rights.

On Monday, as we celebrate our greatest president, let us remember why he—and not Polk or, heaven forbid, Wilson—deserves a national holiday.