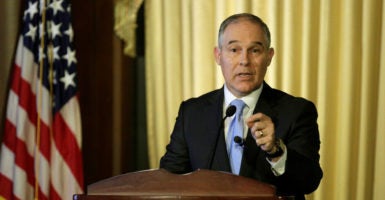 "We are going to once again pay attention to states across this country," EPA Administrator Scott Pruitt says. (Photo: Joshua Roberts/Reuters/Newscom)

“The future ain’t what it used to be at the EPA.”

That was the message of Scott Pruitt, the newly confirmed administrator of the Environmental Protection Agency, to conservatives gathered Saturday at the Conservative Political Action Conference, or CPAC.

“Process, rule of law, and cooperative federalism, that is going to be the heart of how we do business at the EPA,” Pruitt said.

In his role as EPA administrator, Pruitt said that he would work to restore the role of the states.

“What really matters a lot is federalism,” the former Oklahoma attorney general said.

Pruitt said the EPA will also “pay attention to process.”

“We are not going to bypass rule-making,” he said. “We are going to do the work that Congress has said we must do.”

The new administrator also said he will make sure the EPA pays “keen attention to [the] rule of law.”

“As we engage in real rule-making, as we make sure that we don’t use the courts to regulate, we are going to do so with a keen attention to rule of law,” Pruitt said. “Rule of law matters.”

Pruitt said executive agencies must operate under the authority Congress has given them, and not go beyond it.

“Executive agencies only have the power that Congress has given them,  they can’t make it up as they go,” Pruitt said. “They can’t fill in the blank. They can’t say, ‘We’re just simply going to go forward without Congress speaking.’”