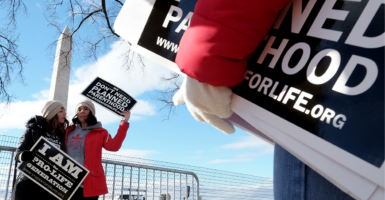 Most Americans are in favor of publicly funded pregnancy resource centers and maternity homes, a recent poll revealed. Pictured: Jaime Brown, 22 and Molly Hurtado, 30, both from Connecticut, pose prior to the 44th annual March for Life rally in Washington, DC on January 27, 2017. (Photo: Bonnie Jo Mount/The Washington Post/Getty Images)

A majority of Americans are voicing their support for maternity homes and pregnancy resource centers three months after the U.S. Supreme Court overturned the landmark Roe v. Wade decision, a recent poll revealed.

The 85 Fund poll, which was conducted by the Creative Response Concepts, or CRC, Research from Aug. 3 to Aug. 7, found that 74% of respondents from across the political spectrum strongly support or somewhat support publicly funding these centers after learning what services the centers provide.

“Local pregnancy center support comes from concerned, pro-life Republicans, independents, and Democrats, who all agree that women should have help with life-affirming alternatives to abortion,” Jor-El Godsey, the president of Heartbeat International, told The Daily Signal in a statement.

“In fact, pregnancy center supporters even include pro-choice community members who want to make sure a woman has more than one choice for her unintended pregnancy,” said Godsey.

Pregnancy resource centers provide women a range of services free of charge, including ultrasounds, material aid, referrals, and follow-up appointments with the center, according to Live Action.

“Her PLAN [or Pregnancy and Life Assistance Network] celebrates the lifesaving, life-changing work of the over 2,700 pregnancy centers and maternity homes nationwide that offer hope and help to moms and babies,” Jill Stanek, the community outreach director for Her PLAN, told The Daily Signal in a statement.

“These organizations exist to accompany pregnant and parenting women through whatever circumstances they may be facing, offering widely respected care and resources. Supporting this life-affirming safety net by connecting assistance providers across seven categories of care is the goal of Her PLAN,” said Stanek.

Only 64% of respondents were originally in favor of using public funds for maternity homes and pregnancy resource centers. However, after learning more about the services they offer, such as providing clothing, diapers, and other needs, support for these centers grew.

Nearly 80% of Republican respondents, 72% of independent respondents, and 73% of Democrat respondents support public funding of pregnancy resource centers, according to the poll.

“With an average client satisfaction rate of 99%, pregnancy centers and maternity homes stand ready to continue their vital, life-affirming work, empowering women to choose life, encouraging them to pursue their dreams, and walking alongside them every step of the way – even years down the road,” Stanek said.

Pregnancy resource centers throughout the country have been vandalized since the U.S. Supreme Court’s decision was leaked on May 2. The first known attack was the next day at the Trotter House in Austin, Texas, according to Pregnancy Help News.

65 pro-life groups’ offices and pregnancy resource centers in the U.S. have been targets of violence and vandalism as of Sunday, Catholic Vote reported.

Eighty percent of the respondents support the prosecution of protesters who “[engage] in acts of vandalism and violence against pregnancy resource centers and churches,” the poll found.

The respondents also overwhelmingly agreed that “elected officials should publicly denounce this behavior and call for those engaging in it be brought to justice.”

“Each time a pregnancy center is harassed or vandalized, it is pregnant women seeking help that are harmed most. Pro-abortion vigilantes are throwing dangerous tantrums and destructive fits and they need to be held accountable,” Godsey said.