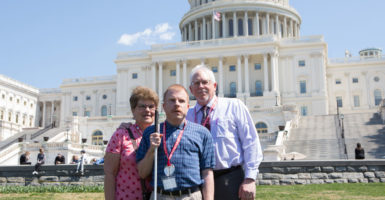 Jeff Balek, born blind in 1980 at 26 weeks’ gestation, poses outside the Capitol with his parents, Tom and Linda Balek. They traveled to Washington from South Carolina to lobby for pro-life legislation. (Photo: Willis Bretz)

Conservative grassroots activists are lobbying House lawmakers to sign a petition in hopes of forcing a vote on a bill that would protect babies born alive after an attempted abortion.

“It is not right to have babies aborted,” said Jeff Balek, who was born blind in 1980 at 26 weeks’ gestation, late in the second trimester of a regular 40-week pregnancy.

Balek, who traveled to Washington from South Carolina with his parents, Tom and Linda Balek, is one of more than 50 “sentinels” associated with Heritage Action for America who visited Capitol Hill from across the country.

The sentinels, who help advance Heritage Action’s priorities, in this case are asking lawmakers to sign a discharge petition on the bill led by House Minority Whip Steve Scalise, R-La., and Rep. Ann Wagner, R-Mo.

“We had twins at 26 weeks,” Tom Balek told The Daily Signal. “Jeff and his brother were born at 26 weeks. His brother lived just a week.

Jeff Balek, now pushing 40, owns his own condo, is a professional musician, is active in his church and community, volunteers at a hospice facility, and tutors sighted at-risk students in reading.

“Not only was he a viable baby and a human being, he’s an asset to the community and the family. And this is our walking defense against abortion,” Tom Balek said.

Scalise, who filed the discharge petition Tuesday, was joined by Wagner and other pro-life lawmakers in trying to force a floor vote in the House on the Born-Alive Abortion Survivors Protection Act.

The legislation would require medical professionals to give the same medical care to a baby who survives an abortion as they would to any other baby of the same age, as well as to take the baby to a hospital.

The strategy of a discharge petition, which usually isn’t successful, requires gathering at least 218 signatures from House members to oblige the chamber’s leadership to bring the bill to the floor for debate and a vote.

Discharge petitions may be considered on the second and fourth Mondays of the month when the House is in session. April 8 and April 22 would be those days for this month.

Republicans currently hold 197 seats in the House, compared with Democrats’ 235 seats, meaning Republicans would need to get 21 signatures from Democrats to force a floor vote.

Scalise, along with Rep. Vicky Hartzler, R-Mo., and Sen. Steve Daines, R-Mont., spoke to the Heritage Action sentinels about the born-alive bill before the activists visited other lawmakers’ offices to ask them to support the petition.

“I am here because I value life, and the thought of a newborn baby being left to die is very repulsive to me,” Tina Turner, 56, a Heritage Action sentinel who hails from Mooresville, Indiana, told The Daily Signal.

“I am here to try to get other House members to sign on, so we can get to 218 signatures for the discharge petition and get that to a House floor vote,” she said.

As a mom whose kids are now 19 and 17, she added: “I just can’t even imagine I would ever let my child fade away without any attention.”

“My message to [lawmakers] is that overwhelmingly, I think it’s like 77 percent of Americans, whether they are Democrat or Republican, just think that abortion, into the third trimester, just shouldn’t happen,” Turner said. “There shouldn’t be a reason for it, because babies are very viable past that point.”