The Supreme Court Delivered a Mixed Verdict on 2 Indiana Abortion Laws. Here’s What That Means. 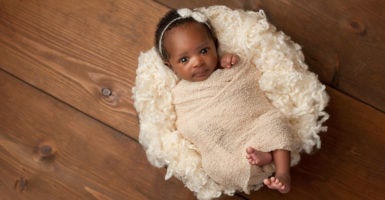 Justice Clarence Thomas wrote a powerful concurrence to the court’s unsigned opinion, explaining the abortion industry’s roots in the eugenics movement and how the Indiana case “highlights the fact that abortion is an act rife with the potential for eugenic manipulation.” (Photo: katrinaelena/ Getty Images)

Christina Eastman is a member of the Young Leaders Program at The Heritage Foundation.

The Supreme Court on Tuesday upheld a provision of Indiana law that requires abortion providers to bury or cremate fetal remains, while declining to review a portion of Indiana’s law—struck down by a lower court—that banned abortions on the basis of sex, race, and disability.

Although the Supreme Court’s opinion in Box v. Planned Parenthood of Indiana and Kentucky Inc. was unsigned, liberal Justices Ruth Bader Ginsburg and Sonia Sotomayor notably dissented in part and would have denied the petition, respectively.

Justice Clarence Thomas wrote a powerful concurrence to the court’s unsigned opinion, explaining the abortion industry’s roots in the eugenics movement and how the Indiana case “highlights the fact that abortion is an act rife with the potential for eugenic manipulation.”

Regarding disposition of fetal remains, the 7th Circuit held that Indiana did not have a legitimate interest in “the ‘humane and dignified disposal of human remains’” and that even if its interests were legitimate, there was not a “rational relationship” between that interest and the law.

The Supreme Court wholly rejected that reasoning and reversed the decision.

In her dissent, Ginsburg asserted that the fetal remains provision must pass a higher standard of scrutiny than rational basis review (a deferential standard that simply requires a showing that a law is rationally related to legitimate government interests). But as the Supreme Court’s opinion points out, the challengers did not ask the lower court to apply heightened scrutiny.

By upholding that portion of the Indiana law, fetal remains may not be classified as infectious waste as defined in Indiana Code Title 16. Health § 16-41-16-4. Put simply, the state of Indiana is well within its authority to recognize that the bodies of preborn children are human and should be treated accordingly, not disposed of with used needles, surgical products, and animal carcasses.

But the Supreme Court let stand the 7th Circuit’s decision invalidating Indiana’s prohibition on abortions on the basis of sex, race, and disability.

The Supreme Court expressed “no view on the merits of the … question presented” regarding discriminatory abortions because only one appellate court has addressed the issue so far.

Typically, the high court will wait for the issue to percolate in the lower courts before granting review. Eight other states have similar laws, so it might only be a matter of time before another challenge reaches the Supreme Court.

Indeed, Ohio is currently defending its prohibition on abortion on the basis of a Down syndrome diagnosis in the U.S. Court of Appeals for the 6th Circuit, and similar cases are making their way through courts across the country.

Thomas took the opportunity to address the second provision regarding selective abortion in a concurrence, noting that such provisions “promote a State’s compelling interest in preventing abortion from becoming a tool of modern-day eugenics.”

He extensively documented the historical ties between Planned Parenthood founder Margaret Sanger’s birth control movement of the early 20th century and the American eugenics movement, which for a time enjoyed widespread support among academics and the political elite.

Whereas Sanger believed that birth control could prevent “unfit” people from reproducing, abortion can prevent them from being born in the first place.

Technological advances have only heightened the eugenic potential for abortion, as abortion can now be used to eliminate children with unwanted characteristics, such as a particular sex or disability.

Thomas described at length the ways in which abortion has already had such an impact on society.

Iceland has virtually eliminated Down syndrome, because nearly 100% of children with the condition are aborted, and many other countries—including the United States—have staggeringly high termination rates.

In Asia, a preference for male children (in addition to programs such as China’s cruel two-child policy) has led to a stark population imbalance between males and females.

In the United States, among black women, the abortion rate is almost 3.5 times that of white women. Thomas also noted that in places such as New York City, a black baby is more likely to be aborted than to be born alive.

Ultimately, Thomas concluded that it remains an open question whether states such as Indiana are constitutionally required to allow for eugenic abortions and wrote that the high court’s “decision to allow further percolation should not be interpreted as agreement” with the 7th Circuit’s decision to block Indiana’s attempt to prohibit discriminatory abortions.

Thomas warned that, should the Supreme Court at some point enshrine a right to race, sex, or disability selective abortions, it would “constitutionalize the views of the 20th-century eugenics movement.”

From admitting privileges to “heartbeat” bills to laws allowing for termination at any point throughout pregnancy, abortion will undoubtedly continue to loom large at the Supreme Court.

The justices may have delayed entering the fray for now, but as Thomas noted, “[t]he Constitution itself is silent on abortion,” and having invented the right to abortion, the court is “dutybound to address its scope.”