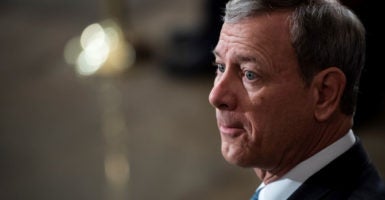 Chief Justice John Roberts did not explain why the Louisiana law was halted. (Photo: Pool/Getty Images)

Late Thursday night, the Supreme Court put on hold a Louisiana law that would require abortion doctors to have admitting privileges at a hospital within 30 miles of their clinic.

The Louisiana law was introduced by state Rep. Katrina Jackson, a Democrat, and passed overwhelmingly in the state’s House of Representatives and Senate in 2014 by a vote of 85-6 and 34-3, respectively.

In 2016, the court ruled that a similar Texas law constituted an “undue burden” on access to abortion within the state. In addition to requiring admitting privileges, the Texas law also would have required abortion clinics to meet the same cleanliness and safety standards as ambulatory surgical centers.

One of Louisiana’s four abortion clinics challenged the new law.

But there are a number of reasons why a state would decide that abortion doctors need to obtain admitting privileges at a nearby hospital, including furthering the continuity of care for patients who experience complications and addressing the problem of emergency rooms not having enough OB-GYN specialists on call to deal with complications resulting from an abortion.

There’s also an additional quality control element because the application process includes peer review of the applicant. After all, although abortion advocates claim it’s one of the safest types of medical procedures, complications such as infection, hemorrhage, and uterine perforation, among others, can occur even in early-stage abortions.

On appeal, a three-judge panel of the U.S. Court of Appeals for the 5th Circuit reversed the district court ruling, finding that the facts on the ground in Louisiana were remarkably different from those in Texas.

Only one doctor in Louisiana had been unable to gain admitting privileges at a nearby hospital and no clinics had closed due to the new law.

By comparison, 32 of 40 clinics in Texas had closed due to doctors’ inability to obtain admitting privileges, requiring a large percentage of women in the state to have to drive 150 miles or more to obtain an abortion. The panel further asserted that three additional abortion doctors “could likely obtain privileges.”

The abortion clinic asked the Supreme Court to temporarily enjoin Louisiana’s law while it appeals the 5th Circuit’s ruling. Courts will stay the enforcement of a law that has been challenged in order to preserve the status quo while the legal challenge is pending.

They would not have halted the Louisiana law, as Kavanaugh explained, because “the status quo will be effectively preserved for all parties during the State’s 45-day regulatory transition period.” In his view, it was not necessary for the court to stop Louisiana from enforcing the law while the legal challenge continues because the transition period would already preserve the status quo.

The 45-day transition period before the new law would go into effect affords doctors an opportunity to seek admitting privileges without burdening any women who wish to obtain an abortion during that time.

In a brief filed with the Supreme Court, the state explained that the Louisiana Health Department’s first step would be to “collect accurate, current information” about current abortion providers since it has been more than three years since the trial in this case and the facts on the ground may have changed.

Kavanaugh wrote: “The law has not yet taken effect, so … [t]hat means that the parties have offered, in essence, competing predictions about whether [other] doctors can obtain admitting privileges.”

The other five members of the court—including Chief Justice John Roberts—did not explain why they halted the law.

However, the Supreme Court does not typically offer explanations as to why it does or does not grant an application for a stay. Two things to bear in mind are that this action does not reflect the justices’ views of the merits of the case, and halting a law is a good indication that the Supreme Court will decide to review the case.

It’s highly likely that abortion will loom large at the Supreme Court next term.