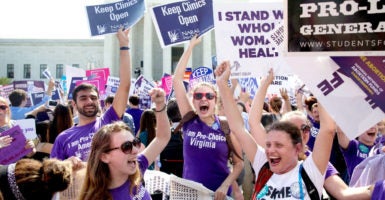 Outside the Supreme Court after the court's ruling in Whole Woman's Health v. Hellerstedt on June 27. (Photo: Michael Reynolds/Newscom)

The Supreme Court has issued its decision in the first major abortion case in nearly a decade. On Monday, the court ruled 5-3 to reverse Texas’ law requiring abortion clinics meet commonsense safety standards regularly followed by facilities that perform invasive outpatient surgeries and requiring doctors who perform abortions to have admitting privileges at a nearby hospital.

Abortion entails known medical risks and it’s a no-brainer that abortion clinics should have to meet basic sanitary requirements and safety standards.

In Whole Woman’s Health v. Hellerstedt, the Supreme Court considered whether these commonsense reforms intended to protect women’s health had the purpose or effect of imposing an “undue burden” on women seeking abortions because substandard clinics would have to improve their safety standards and protocols or close.

Abortion entails known medical risks and it’s a no-brainer that abortion clinics should have to meet basic sanitary requirements and safety standards, such as ensuring hallways are wide enough for first responders to get a stretcher through in an emergency.

Also requiring abortion doctors to maintain admitting privileges at a nearby hospital could make the difference in life-or-death cases where something goes wrong during a surgical or chemical abortion, which happens at least 200 times a year in Texas. Women deserve safe and sanitary facilities and continuity of care when they have any type of invasive surgery, and abortion should not be exempt from the rules.

In an opinion written by Justice Stephen Breyer, five members of the court concluded that neither provision advanced women’s health, and instead placed an “undue burden on abortion access.”

Though the Supreme Court invented a constitutional right to abortion more than 40 years ago in Roe v. Wade, the Supreme Court replaced the strict standard applied to state regulations with its 1992 Planned Parenthood v. Casey decision.

The Supreme Court had previously recognized Planned Parenthood v. Casey to mean that, “where it has a rational basis to act, and it does not impose an undue burden, the state may use its regulatory power” to regulate abortions “in furtherance of its legitimate interests in regulating the medical profession in order to promote respect for life.”

On Monday, the Supreme Court rejected its precedents that allowed states to issue regulations provided they have a rational basis, finding abortion regulations must have more than a “reasonabl[e] relat[ion] to … a legitimate state interest.”

Lawmakers will no longer be given deference on contested medical questions and now, it seems states will have to prove that such regulations are “necessary.”

As Justice Clarence Thomas pointed out in his dissent, this requirement is “nowhere to be found in Casey” or the  Supreme Court’s subsequent abortion cases, and it “transform[s] the undue-burden test to something much more akin to strict scrutiny.”

This puts states in a jam because it’s unclear just how much evidence they now must put forward to support any abortion regulation designed to protect women’s health.

The majority opinion also made light of the horrors found in the Gosnell clinic, which for years ran a filthy operation, killed children born alive, and wounded and injured unsuspecting women, in one case to the point of death.

Gosnell’s behavior was terribly wrong. But there is no reason to believe that an extra layer of regulation would have affected that behavior. Determined wrongdoers, already ignoring existing statutes and safety measures, are unlikely to be convinced to adopt safe practices by a new overlay of regulations … The record contains nothing to suggest that [Texas’ law] would be more effective than pre-existing Texas law at deterring wrongdoers like Gosnell from criminal behavior.

This ignores one of the amicus curiae “friend of the Court” briefs discussed at oral argument as cataloging “appalling violations” at plaintiff Whole Woman’s facilities, including “[h]oles in the floor—where rats could come in, [and] the lack of any equipment to adequately sterilize instruments.”

The argument is also ironic coming from liberal Breyer, because it echoes a common objection of Second Amendment supporters to new restrictions on gun ownership.

Rather than allow state legislators to make commonsense judgments about how to regulate the abortion industry, a majority of the Supreme Court today inserted itself into the legislative realm and has become, as Thomas pointed out, “the country’s ex officio medical board with powers to disapprove medical and operative practices and standards throughout the United States.”

As examples, the court deferred to the district court’s many sweeping pronouncements on the likely health impacts of H.B. 2, such as crediting the claim that women “will not obtain better care or experience more frequent positive outcomes at an ambulatory surgical center as compared to a previously licensed facility,” and that “separating soiled utility and sterilization rooms; and regulating air pressure, filtration, and humidity control” would not reduce abortion-related infections because “the natural opening of the birth canal is itself not sterile.”

In other words, the court is claiming a woman’s body is already unsanitary to a certain degree so no need to increase the cleanliness of the abortion environment and abortion instruments.

Interestingly, the majority never mentions that Texas’ regulations were intended to interfere with abortion access, only that they had that effect without sufficient cause. Nevertheless, Justice Ruth Bader Ginsburg wrote separately (and alone) to accuse Texas of bad motives based on an argument that Texas was singling out abortion when it came to regulations.

The Supreme Court was wrong to strike down Texas’ reasonable law intended to protect women from conditions like those found at the Gosnell clinic.

With this decision, the Supreme Court unfortunately continues the long, deadly shadow that the court’s abortion decisions have cast over American law, medicine, and society. It has allowed abortion extremists to keep substandard abortion clinics open, and has hamstrung states’ ability to put women’s health and safety first. Despite what those on the left may claim, today’s ruling is no victory for women’s health. Women deserve better.