Louisiana Passes Amendment Saying There Is No Constitutional Right to Abortion 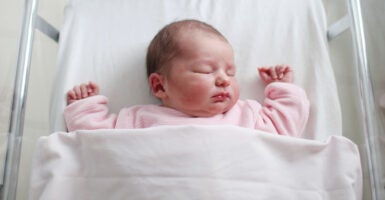 Louisiana voters passed an amendment to the state constitution Tuesday evening establishing that there is no constitutional right to an abortion.

The New York Times reported that 62% of Louisiana voters supported Amendment 1, “Love Life Amendment,” an amendment stating that nothing in the Louisiana state constitution protects the right to abortion or abortion funding. Louisiana also has a trigger law automatically banning all abortions if Roe v. Wade is overturned, according to NBC News.

“We are protecting our state’s taxpayer dollars and reaffirming Louisiana’s pro-life stance. We also believe that our people should have a say in this,” said the sponsor of the measure, Democratic state Sen. Katrina Jackson, NBC News reported.

“We’ve been working hard to get the word out about what this amendment does and what it doesn’t do,” added Louisiana Right to Life Associate Director Angie Thomas. “This amendment will make sure that Louisiana’s current pro-life laws are protected and can’t be undermined by a couple of judges.”

“We have several cases heading towards the Supreme Court, and any one of them could be a case that undermines abortion rights or overturns abortion protections,” Associate Director of State Issues at the Guttmacher Institute Elizabeth Nash told NBC News.

Michelle Erenberg, executive director of the abortion rights group Lift Louisiana, said the amendment is part of a long strategy to strip the right to an abortion.

“This is a critical moment for an amendment like this to be on the ballot,” added Erenberg. “If we do see Roe v. Wade overturned, it would be used to bolster and solidify the Legislature’s efforts to outright ban abortion in the state.”